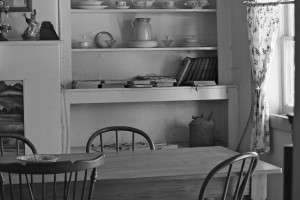 During Christmastime when I was 14 years old, the boy I was dating was over at my house helping my family bake cookies. We had baked snickerdoodles and gingerbread, and we were moving on to my favorite peanut butter cookies. My boyfriend, Gary, was instructed to add the salt. These being cookies, the amount of salt called for by the recipe was quite minimal – one teaspoon for the batch. To anyone who had baked anything before, I’m sure this would have seemed like a normal amount. Gary, however, had apparently never baked anything before and somehow ended up adding an entire cup of salt to the cookie dough without my knowledge. The cookies were on a baking tray and ready to go into the oven when my younger sister, licking the spoon, complained the dough was way too salty. Gary was confronted, the truth came out, the dough was ruined with too much salt and we had to start over.

Conversely, just the other day my mother was baking rolls in preparation for Thanksgiving. She baked a large batch of 30, only to take a bite of the finished product and realize she had forgotten to add salt completely. The rolls tasted like flour, a batch of baked goods once again ruined by an incorrect amount of salt.

I have found that writing can be a lot like baking; it comes back to balance. And balance doesn’t mean an even mixture of every ingredient, but knowing what the right amounts of different ingredients are in order to balance them out and create an enjoyable final product. Everyone loves a good sugar cookie, but if the only ingredient was sugar there wouldn’t be much of a cookie, there wouldn’t be anything to hold it together. When writing a piece, the focus of my writing cannot just be on one element. My cup of salt in my writing has often been description. I have a tendency to focus on lengthy descriptions of places and things, trying to get every detail down perfectly. But description without action or reflection can become long and meandering and it can be easy to lose the thread of the story. I also have to be aware of the form I am writing in and whether it fits the message I’m trying to get across. Having all the ingredients for cake batter and then trying to make cookies out of it is most definitely going to result in a mess. More than once I have made multiple attempts at writing a story in the first person only to eventually realize that only way it can be told is in third, or tried to hammer out an idea as an essay over and over before it dawned on me that the idea would flow so much better as a poem. It’s important to both have something to say and to know how to say it. Sometimes trying new things may work out in a way you don’t expect, like my mom’s chocolate chip zucchini cookies that are seriously some of the best cookies I’ve ever eaten. A good piece of writing a balance of action, reflection and description, built on a base of good subject material, with a clear narrative voice and maybe some experimentality, something new. If you can balance and mix everything together just right, you have a better chance of making something good.

The Ides of March