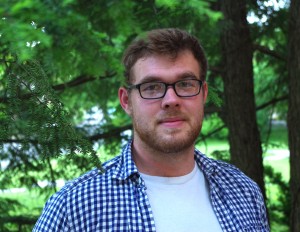 You love your boyfriend.

There are days you want to do nothing but rub his belly as if he were a dog.

There are days you do this.

Others, he tells you about each boy he sees wearing gray sweatpants & talks about becoming a photographer.

These days, you count the birds perching on the telephone wire across the street.

Your boyfriend buys a camera & decides to begin a photo essay, plans to photograph naked men through his front window & call it The Men in My House.

Until now, you thought you were the only man in his house.

He reopens his Grindr account: ISO male models, nothing sexual.

The first man has hearts tattooed around his nipples.

He is undressed before the camera is ready & he has an erection the entire shoot.

You know this because your boyfriend shows you the photos afterward.

You know this because you know what Grindr is.

Every two weeks you climb into your boyfriend’s bed & he shows you a hundred photos of some new man, some new torso twisting toward the camera lens.

Photo: a man stands at the sink in his underwear, blowing bubbles.

Photo: a man presses his forearm against the window, muscles flexed, back arched.

Photo: a man spreads his legs & turns his face to the wall.

Photo: a man sits in a chair, thigh wet with precum.

Photo: a man stands naked in the backyard, a leaf covering his penis, then not.

The men have been naked everywhere in his house.

You think: this is the way one thing becomes another, the way a man is replaced by the idea of a man.

You cannot sit on the couch anymore.

You cannot sit at the kitchen table anymore.

You cannot look through the front window or in the bathroom mirror or at the throw rug in the living room anymore.

Photo: a man crosses his legs & raises his hands above his head.

Photo: a man’s pink lips, a nipple, the curve of hair beneath his arm.

Photo: a man from the waist down, your boyfriend’s face reflected in the glass.

There are no photos of how it ends.

When it is over, you cannot bring yourself to pass his house.

When it is over, you cannot go to the only gay bar in town without seeing one of his models.

“It,” of course, means many things.

It has always meant

The internet tells you, weeks later, he has begun a new project.

The men are still naked, still in his house.

He uses a long exposure & has them move, traces the white blur of their limbs as they bend & stretch against the wall.

In the photos, you see only the gesture of an arm, the outline of a scrotum.

You see only the space where the men’s bodies have been, becoming before the camera ghosts of themselves.

Patrick Kindig is a dual MFA/PhD candidate at Indiana University, where he studies American literature and writes poems. His poetry micro-chapbook, Dry Spell, is forthcoming from Porkbelly Press this year, and his work has appeared in the Beloit Poetry Journal, Willow Springs, Court Green, Fugue, and elsewhere.