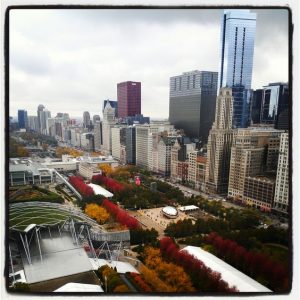 School is in session at Columbia College, and the hallways are bustling. However, as of this writing it is 93 degrees in Chicago on this first morning of fall. All of which puts me in mind of a first school day years ago at Spring Harbor Elementary, where I arrived on a similarly sweltering day in my new school clothes: corduroy flairs, long-sleeved polyester shirt, and faux-buckskin fringed vest. (It was the seventies.) After a half an hour of kickball on the playground before the bell, I arrived at my new classroom disheveled and soggy. The transition from summer to fall is not merely accomplished by the passage through a pair of swinging doors.

Here at Punctuate we are easing into fall with our September issue, featuring thoughts on the seashore by Marc Frazier, a writer born on the prairie. Also in this issue is an interview with fiction writer Patricia Ann McNair, whose first collection essays, And These Are the Good Times is just out from Side Street Press. On our Semi;colon blog, we consider the possibility of David Trinidad’s “Ode to Buddy Holly” as a “nonfiction” poem. The essay “Basements” by Tom Fry is a preview of the special section “New Nonfiction from Millennials” that will appear in our second print issue, which arrives in October. Also, featured in the print edition will be a collaborative essay, compiled by Punctuate coeditor Garnett Kilberg Cohen, made up of short segments composed by fellow attendees of the NonfictioNow conference in Reykjavik, Iceland, this summer.

Finally, we are happy to reprint two contributions that originally appeared in our first print issue but, due to miscommunication on our part, were incompletely or incorrectly presented. We are happy to reprint Five Prose Poems from Study Child of Terror by Holly Iglesias and “Insomnia” by Landon Godfrey in their entire and correct forms. They will also appear in Punctuate 2, and we thank these writers for their grace and patience. Brigitte Riordan: On Writing and Food