On My Own Writing 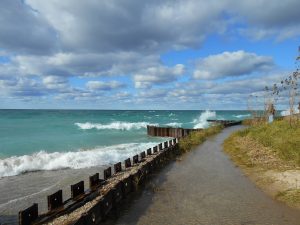 About four weeks into my first semester of college, I decided to write about the issue most pressing in my mind: overwhelming homesickness. It wasn’t a conscious obsession in the way that everything else I’d ever written about was; I didn’t choose to focus every hour of every day either reacting to my transition or analyzing every detail of it. It was the first time in my life that I was going through something that caused such a devastating sense of loss I couldn’t escape from. The worst I had gone through so far was a really horrible breakup in high school, and I was all too aware of my fortunate life. I had never dealt with family issues or the deaths of anyone really close to me.

I felt ashamed to tell people that the reason I struggled to participate in class the first few weeks was because I was trying not to cry due to the fact that I was in Chicago instead of my small hometown in central Michigan, the place where my family, friends, and significant other were. It was a bizarre and surreal time, one that a lot of people, myself included, found hard to understand.

I learned that it was the kind of experience that doesn’t have a clear sequence, beginning, middle, or end. It was just something I had to muddle through to the best of my ability until, for the most part, it subsided. More than that, I learned that any moments of clarity came from turning to writing.

The piece that I wrote, during that first semester when everything was still so overwhelming, started by focusing on a piece of scenery that gave me a sense of comfort: Lake Michigan. I challenged myself to find just the right words to describe the ever-changing colors of the water, and how from my small bedroom in my new apartment, I could basically only see a small portion, near the aquarium.

“The water glitters various shades of blues and greens; yesterday, it was a dense, navy mass. Today, as the sun shines through the clouds, the water is a gentle turquoise, glistening as though diamonds make up the surface while darker strips appear here and there.”

From there, I described my apartment, trying again to use details to bring the setting to life. Those kinds of details have always seemed tedious and difficult to me, but after taking a break from the piece and then reviewing my imagery, I realized that I had done it justice. This motivated me to continue to see where the piece was going, though I knew it would revolve around my experience.

From images, I moved to people. This is where workshopping this piece helped most; I was able to go back and add background details that I had originally, accidentally, left out, having known the main characters so well. From there, I went into personal history, again setting an image of my hometown to compare to my new residence in Chicago.

“I used to be surrounded by corn, hay, and pickle fields. [Now] I live on the 20th floor of a highrise apartment building…”

The piece came full circle through reflection at the end, and I remember crying as I wrote it because the words were painfully true and because I felt such a sense of relief from siphoning them out of my brain and onto the page.

“Nobody warned me that because I spent eighteen years living in the same place, with the same people, it was going to be so goddamn difficult to forget how comforting that was when I got to this new place where I didn’t know anybody. [But] growth can’t happen in a place that never changes, never challenges you.”

The piece was edited in my workshop class, and I would recommend that process to any writer, even with a piece that holds a strong personal attachment. Through the whole process of writing this piece, I knew that I was creating something important, something good. I was expressing things that I needed to while simultaneously pushing myself to stretch my talent as far as I could.