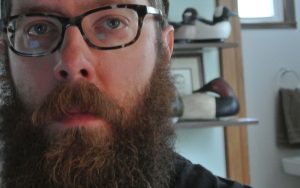 The yard and driveway maintained through all seasons. Leak above drop in ceiling causing obvious damage. The saints of fire dance sideways through the scene. Toilet in front bath leaks into basement. The subject of every love song is actually the self. Basement recently cleaned but foundation leaks beneath the stairs and at west and east walls. Hole in buckling wall along stairway. A lit, wooden face on the horizon. Smile of fieldstones. Kitchen fan cover removed and never replaced. Planted flowers, back and front yards. In the culture of getting, all is negated by crows and ravens, who get and get and get. Recently extinguished weed patch out front where pine perished in May. There is something about the future, its lack of certain flaws to be replaced invisibly by a lack of others. Peeling paint. More peeling paint. Gutter leaks above mailbox. What needs to be done versus what was given. Time to dream the long dreamless night of the soon-to-be-dead.

A shot of vodka, a squeeze of lemon, a drop of agave—stir it with a sharp knife. It is impossible for God to speak to “no one in particular” just as it is impossible for the sun not to bleed through the chained gates at the end of the wooded lane, the family hunting ground now sold and denied. Someone on our street leaves for the night, leaves a door unlatched to bang and shudder. This is the sound of light hitting a planet, the sound of stones in the ocean, or blood mingling with sand. It’s all surface until something in the middle of the deepest swirl starts to pull—the glassy edge outside the rush is just as furious underneath though there is no stone to show it, no footnote to the wet thrashing you’ll earn yourself unless you turn back. This happened yesterday. I wrote about it then. I suppose I’ll write about it again when the time comes: the genuine always ends up as a crutch, the meaning found is the meaning sought; if it’s not, then why return to anywhere at all? Why call out? Why return a call? The river calls out. I could say it is calling now, but would you hear it? Would you call back? Who am I to say: you wouldn’t.

Most people who ask your opinion regret it. They crawl up on you. The woes of nondirectional innuendo. The best protein you can buy. Milk in jugs. Stacks of bundled celery. Piles of abandoned artificial limbs. You’re just a darling omnivore. Every lost cause deserves a patron saint. The patron saint of cannibals. The patron saint of juries that convict cannibals. The patron saint of titty jokes. The startling form. The starling’s flaw. Too much of it. Patron saint of the ribald. The patron saint of those that fear parasailing but not other forms of flight. The claxon sounds, deep in the champagne border of nightfall. The people in twos. In love or on their way to it. The bereaved in their punishment of living still. How does everything get  so dirty? The thinking grows thick. The patron saint of sports cars that change color at the push of a button. Amanda hands me a bumper sticker that reads honk if you don’t exist. Suddenly this all is about cars. Doomed from the first. A jacket of pure frost. A season taken out of turn and held, like a grape, to the light.

We talk constantly of the apocalypse: words spoken in an open field over a very low grave the earth is eager to swallow. Swans—all fall we counted more swans than ever before: bows and knives of swans yelping over the marshes south of Sandusky Bay (one of the reasons I say home). The blueprints that arrived today were sick with feathers, the bookstore ate my pens and then the bookstore disappeared—replaced by a rancid boutique. You want autobiography? Yesterday I had my first colonoscopy. Saturday morning among the manuscripts, my mind plots its way back and forth from the ailing half-naked pine in the backyard—every step in-between part of this one-off ritual. Every immortal is a bumbler, every vagrant a cosmonaut, every tycoon a templar. You’re sure you can handle all of this? Maybe take a few days off . . . The schoolroom door opened onto rivers and lakes—plateaus of water, blue forest, rice—a wing of smoke on one hillside, and the sound of laborers troubling the undergrowth. Maybe a break wouldn’t do you any good after all.

Here is a thread from the blanket you were wrapped in the day you were born. Summer, right now, what is it but a green breeze easing memories to and fro in the skull? Forty-three in Alaska and negative fourteen here in Ohio. A dove, a cardinal, ten starlings, in that order, past the picture window. Andrew Wyeth is dead. Enough of this grounding—think instead that there may have been an instant when every eye on earth was open. Venison, black beans, chili powder, sherry vinegar, chopped onion, cumin, salt, tomato soup, and a can of Pabst Blue Ribbon. Henryville is in the Poconos—she had a house there. Magnet: at first the sun turns the clouds tangerine, then sapphire, before drawing up into the blue-jay blue above the fields, trees, marshes, lakes, river, towns, cities, passions, braveries, and lies. Violate the spirit and good faith rips its skirt dancing in the alley. A gaping hole in his head, a mob of flies at the wound—the groundhog strenuously objects.

An arm of radar to track the progress of trees, a shark’s brain to chart your breath against a green pillowcase—things we have to find the world, world we have to find with things. And then I was thinking of the dog: the thickness of his paws, that wild metronome of a tail, his stare that can sink me a hundred yards away. A target of heaven: I may start with antlers scraping low boughs but hit the edge of nonsense and turn my back, stray words going by unheard behind me. Tomorrow grilled steelhead with asparagus and zucchini, bread and butter, and after that…should it matter? I dreamt I was in Hell—always bad luck—but, I was grinning and the torture didn’t really factor. An eagle’s claw at the bottom of a bottle of vodka: perfect for my museum of misremembered perversions. What more than an orange and yellow kayak to lean in the garage? A speck of white dust. The groan and gurgle of cattle drowning—an almost man-like racket.

F. Daniel Rzicznek’s collections and chapbooks of poetry include Nag Champa in the Rain, Vine River Hermitage, Divination Machine, Neck of the World, and Cloud Tablets. He is also coeditor of The Rose Metal Press Field Guide to Prose Poetry. He teaches writing at Bowling Green State University.