Amy Fusselman in Conversation with Punctuate

In Idiophone, Amy Fusselman’s fourth book of nonfiction, performances of The Nutcracker morph into magicians performing magic tricks which transform into the performative acts of being a mother and being mothered. It’s a slim book comprised of one book-length essay and yet it’s jam-packed with research and poetry; analysis and anecdotes; memory, critique, queer theory, and motif. Fusselman’s previous books include Savage Park: A Meditation on Play, Space and Risk for Americans Who are Nervous, Distracted and Afraid to Die; The Pharmacist’s Mate; and 8.

Fusselman is currently touring and Idiophone can be purchased here. The interview was conducted by S. Ferdowsi via email and was edited for length and clarity. 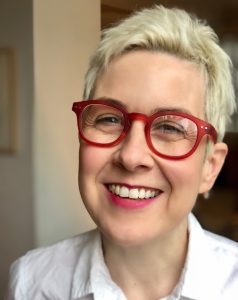 Punctuate: An “idiophone” is defined as an instrument that is struck or shaken, such as a triangle or a cowbell. What attracted you to the idiophone—in particular the Slit Gong at the Met?

Amy Fusselman: The rhythmic, staccato sound of the piece immediately announced itself as a major factor, and the idiophone of the title, the artwork at the Met, came to mind as an instrument that would make that sound.

P: How would you describe the form? When was it born?

AF: It’s an essay, a poem-ish essay. It had a long gestation period. It’s hard for me to say when it was born because it was brewing for so long

P: The book uses a lot of these quick, quick phrases that play with repetition, but it’s also infused with tons of research especially on The Nutcracker. What did your research process entail?

AF: I have been thinking about The Nutcracker for years. It was a pretty organic process of following my interests and going down little rabbit holes of information. I was also very grateful to find Jennifer Fisher’s book Nutcracker Nation, which is a very engaging history of the ballet and which I highly recommend.

P: How did you balance the brevity of the form with all the exhaustive data about the ballet’s history? How did you keep track of all the 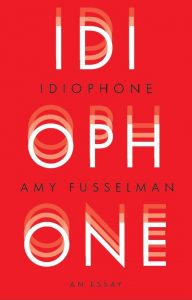 AF: I didn’t try to tell the entire story of the ballet or to offer the essay as a piece of scholarship. A lot of it was discerning what was relevant to the piece. In terms of keeping track of the threads, I didn’t write the book by thinking it. I wrote it by letting go of thinking, and that was very freeing.

P: I love that! I find it’s really hard to turn off the compulsion to always be thinking while I’m writing. How were you able to let that go and access this freeing space? Did you have any rituals?

AF: I probably could have used some rituals. I didn’t have any except for the enthusiasm about the material as it was unfolding.

P: Was the revision process similar? Did you revise after writing?

AF: Yes, many revisions. But they were mostly micro revisions.

P: Along with The Nutcracker, the concepts and lived experiences of gender, sexuality, and queerness are also investigated, and your overall body of work also seems interested in exploring these themes as well. Do your ideas on gender, sexuality, and/or feminism change after each writing project? If so, how?

AF: I have a few subjects that are so far always interesting to me: creativity, womanhood, children, motherhood, art-making, process, consciousness and sex. Maybe there will come a time when I’m no longer interested in one or all of these but I’m not there yet.

P: Do you remember when you first became interested in gender and womanhood? For me, it was when I was in middle school and addicted to this Young Adult series about a young woman going to boarding school in Victorian England. It’s silly, but it was the first time I had opened my eyes to see how patriarchy operates.

AF: I don’t think that’s silly at all. And I’m struck that you were alone in that discovery. I would love to see parents take that on. Maybe we can reframe “The Talk” to mean the discussion you have with your children about the patriarchy. Although the patriarchy talk would surely have to come earlier than the sex talk. For myself, those interests are rooted in the childhood experience of being raped and then discovering later that my mother had also been raped.

P:  This reminds me of your McSweeney’s piece “How to Make Rape Lemonade.” I was struck by how the essay’s dual modes of being light-hearted and tackling heavy subject matter really cracked open another way of dealing with trauma for me. Did the discovery of your mother’s experience alongside your own lead to this essay?

AF: That piece actually grew out of my trying to write a rape joke. I think the primary thing it does well is not dramatize rape, and not apologize for not dramatizing it. I think the drama can be a way of other-ing it, and I wanted to push back at that.

P:  I like your take on the death of the Mouse King: “He is no longer dead, he is “dead,” and in this meta move, he reminds the audience that he is alive and that this is a performance. In the same vein, I feel that the queerness in your book serves as a reminder that heteronormativity is performative.

AF: Absolutely, yes. I was also interested to discover that Tchaikovsky himself may have been struggling with revealing his sexual identity. The Nutcracker as well as its sibling piece, the opera Iolanta, are so much about the longing to fully see and be seen.

P: Do you think the relationship between writer and reader operates in a similar way? Does a writer long to fully see and be seen?

AF: I think it depends on the type of writer. All humans feel the need to be mirrored and understood. But I find that a lot of writing operates, in a way, like advertising. It aims to get your attention and hold your attention and sell itself. I like a good ad as much as anyone but I want to make art that resists that as a mode of construction. I believe in the reader; I think the reader is brilliant. I want to give them more.

P: You mentioned art-making earlier and, in Idiophone, you included an interview with Annie-B Parson about the art of dance. Do you think there are parallels between writing and dancing?

AF: Certainly in this piece. Dance isn’t usually associated with writing because it’s nonverbal but I feel a lot of kinship with what dance is doing. And I loved Annie-B’s quote about dance’s relationship to “the word,” and how dance, as a province of women and of bodies, has been relegated to a lesser status in theater. I felt that had a connection with what I was thinking about in relation to writing as a handcraft, and to “women’s work.”

P: Motherhood is also a major topic in Idiophone and you include some really cool anecdotes with your children, like taking a boxing class together—do you tell them whenever they’ve made a cameo?

AF: I tell my kids about their appearances in any work before it’s published, and I do ask for their approval but it’s tricky because they aren’t old enough yet to really be capable of consent. My daughter and one of my sons—my sketches of them—appear briefly in Idiophone. My kids are aware of my renderings and they’re OK with them but we’ll see what happens. Parenting is a long game. Like writing is.

P: Can you elaborate on that?

AF: It’s hard to tell if something is going to be successful in the short term. That’s true for human beings and it’s true, I think, for art. It also depends on what your definition of “success” is. I think children are here to complicate matters for parents, not to make things easier. Children are here to challenge us and survive us. And I think good art—or at least the art I like—does that, too. And that type of art doesn’t always get a warm reception immediately.

P: I think we’re living in a broader cultural moment that is bogged down by information and misinformation. And as a result, media outlets and online sources tend to explain major ideas in simple terms, or in lists, or even as memes. But in your book, readers really have to do the work themselves of seeing the connections and seeing how their meanings emerge and evolve as the book progresses. I loved that. I found it really challenging but also delightful. Do you think your book can be considered as a resistance to our current information-heavy moment?

AF: I didn’t think of that but I like it. And I’m glad you found that aspect rewarding. I generally don’t like art that explains itself too much. I like it when I feel like a piece of art has just appeared like it’s from outer space: somehow it got here, and it’s a miracle, and you’re just standing there with your mouth open, like what the fuck. “What the fuck?!” is actually my favorite response to have to a work of art. I am always so grateful to the artist when I see a piece like that.

P: Finally, the book-length essay seems to be gaining more popularity. I’m thinking about Maggie Nelson’s The Argonauts, Claudia Rankine’s Citizen, Anne Carson’s Glass, Irony and God, and Etel Adnan’s Paris, When It’s Naked. These books are all written by authors who identify as women; do you think there is something there that connects women to book-length essays in particular or it’s just a coincidence?

AF: That’s an interesting observation. I think women, already operating at a disadvantage, have less to lose by trying new forms, whereas men have to think about the 300-page-novel father. And killing him.

S. Ferdowsi is Punctuate‘s reviews editor. She is also a contributor to New City and Rumpus.