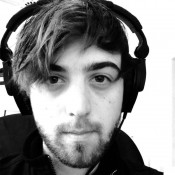 Hi, I’m Logan. I am in my first year in the MFA Music Composition for the Screen program. I received my BA in Music Technology from Montana State University Bozeman. I live in Bucktown and go to as many concerts as possible.

I graduated from Montana State University in 2012 with a BA in Music Technology. My time spent in undergrad was shared between writing music for student filmmakers, playing trumpet for way too many school ensembles, and touring with a funk band. I was lucky enough to get three of my soundtracks recorded by the school’s symphony orchestra. Hearing my music performed live was an experience I won’t forget. It really motivated me to continue my studies in composition for the screen. Over the last two years I have scored a PBS documentary and eight short films.

When deciding on where to apply to for graduate school, I looked very carefully at each program. Columbia was always on the top of the list. With only twelve students admitted per year, the class size allows for individual critiques. Our professors Gary Chang and David McHugh, both of whom are very successfully composers, have almost limitless information. Unlike USC, this is a two year program. I can learn much more in two years than one, with a summer in between to put my learning to practice.

The graduate level directing and producing students are another plus. These students are looking for original music for their thesis films, a perfect opportunity to start networking. When researching my favorite current film composers, a lot of them still work with directors they meet in school. In addition, students get to record their compositions using professional orchestras in Chicago and during their LA internship. The summer internship in LA really takes this program to the next level. During the summer after graduation, students intern with hollywood composers such as John Powell, Mychael Danna, and Danny Elfman.

I am in the early stages of scoring an animated short film. I have written everything from sci-fi, horror, action, to drama, but this will be my first soundtrack for animation. I am sure it will be difficult, but grad school is the right place to try new challenges. I have always wanted to score animation, but previously there was no opportunities.Thanks to connections at Columbia, I am able to collaborate with artists from the animation department. Other projects in the works include a feature length documentary, some thirty second commercials, and composing for a video game created by Columbia students.