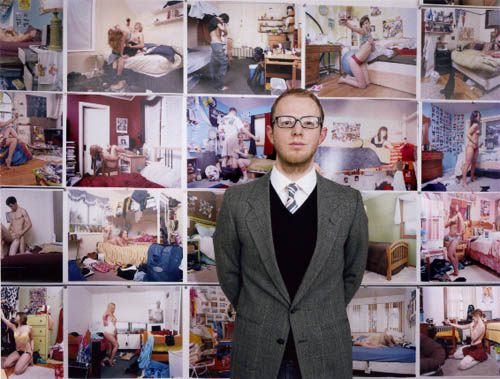 I earned my B.F.A from the College of Visual Arts in St. Paul, Minnesota in 2007. Since 2006, I have created two bodies of work, The Illuminati and Technically Intimate. They have been exhibited internationally with museums and galleries in London, Paris, Venice, Florence, Finland, The Netherlands, Toronto and throughout the United States. My work is held in the collections of the Walker Art Center, Milwaukee Art Museum, Museum of Contemporary Photography, and the Kinsey Institute. Pieces have also appeared in numerous publications, including TIME, The Guardian, FOAM, New York Magazine, Le Monde, D della Repubblica, DUMMY, Geo, and DIE ZEIT. In 2008, I won the Jerome Fellowship for Emerging Artists. I have also been a finalist for the McKnight Fellowship for Photography and nominated for the Baum Award for Emerging American Photographers.

About a year ago I began to think about graduate school. It had been a few years since I had been in school and I felt like the time had come to head back. I had come to a point with my own work where I felt that I needed some help (mostly in the form of critique and time) to push my work the level that I think it can achieve.

There were several things for me to consider when choosing a graduate school. First, I wanted to go to a really good program with great instructors. My goal was to be in a great graduate program, not just any program that would take me. Second, I was specifically looking in the Chicago area, as my wife was in school in there.

The choice to attend Columbia came down to fit for me. Columbia felt like a place that the work I wanted to make would fit. My work takes aspects of youth culture and documents them using the medium of photography. I thought the professors in the Photography program at Columbia were a good fit for that type of work. That was the largest factor in my decision. Other contributors were the excellent facilities and the length of the program. With the way that I work, my images take a long time to make, and the three-year program is a big advantage.

I would also like to take a closer look at how feminism has changed over the last 30 years, from a sense of female empowerment to a willingness and want by young women to be seen as a sexual object. I happen to feel there is a difference between female sexual empowerment and posing for Playboy.

I have begun writing and currently have 60 images that I want to shoot. That should take me the next three years or so. The imagery will take on many different looks and I am hoping to get a really wide variety. As with Technically Intimate I am taking a lot of cues from the imagery that I find online. I will use those images as a base to jump off of. Right now my head is still spinning with all of the elements that I want to include in this body of work. I am slowly, but surely, beginning to refine them.