Protesters gather outside of O’Hare Airport’s terminals to rally against President Trump ban.

The world is a pretty crazy place right now. A lot of things are happening politically that we never thought we’d see happen, or that we didn’t think were possible or legal. There’s a great deal of talk about cultural and racial divisions that have been defining parts of the lives of more marginalized populations.

Now, maybe more than ever, it’s time to figure out what our roles are and where we stand, both as citizens and as journalists. We live in a world where our leaders lie, contradict themselves, tweet recklessly and overwhelm their constituents with uncertainty, in general.

The role of news media is constantly in question both with regard to whether or not we created this administration by creating a somewhat entertaining spectacle of this election cycle and, now with regard to our responsibility to the people and to the politics of the time. 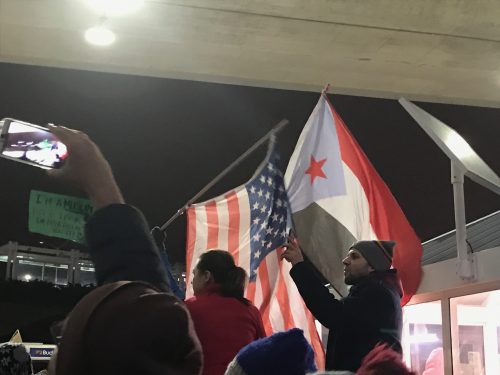 Protesters gather outside of O’Hare to rally against Trump’s travel ban.

And what of objectivity? Is there space now for us to openly align ourselves with our own personal politics and remain true to our craft? Will those of us in marginalized communities have to choose between our profession and our personal politics? What does it mean to be the diversity within a news media organization and have guidelines that outline when you can act politically in accordance with them?

What does it say about us as a country when aligning with your “personal politics”– which, in some cases, are made “politics” because the government has decided to make them so–  away from work settings could make your work null and void to readers? 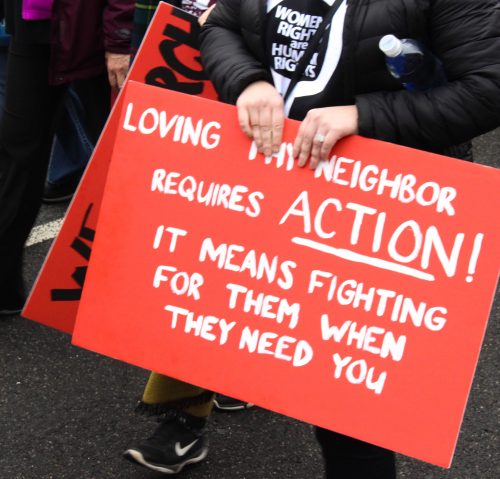 A protestor holds a handmade sign at the record-breaking Women’s March in Washington, D.C. the day after Trump’s inauguration.

As we move into journalism as a profession, there are a great many ideas and ideals we have to turn over, both as professionals and as national and global citizens. In our classes, we’re constantly debating how to balance the two roles and whether or not there are spaces where the two overlap or intersect. I’m grateful for this program because I’ve been invited to explore conflict, not just within our state and national systems, but within myself. We’re given space to figure out what ideals are important to us and what kind of journalists, and people, we want to be.

Columbia’s Journalism, MA program is a diverse one that explores ethics in and outside of the profession, and one where instructors challenge what you know, teach you the basics and then challenge how those techniques fit into our current world. It’s one that doesn’t get bogged down with the idea of “digital disruption,” but shows us how to evolve to fit into what news is becoming. And that’s indispensable, especially now.