I’m one week into this semester’s classes that include some magazine editing, some state legislature reporting, a little business savvy about journalism startups and a state/national government seminar.

But while this is just the first week of Spring for some, many of us are fresh off of a J-term course. A J-term course is a short class that can be taken within the last three weeks of Winter break. Some journalism students went to Ireland for a couple of weeks and, I believe there was also a creative writing J-term in Paris.

I, on the other hand, went to Washington, D.C. five days to cover the inauguration of Donald J. Trump… 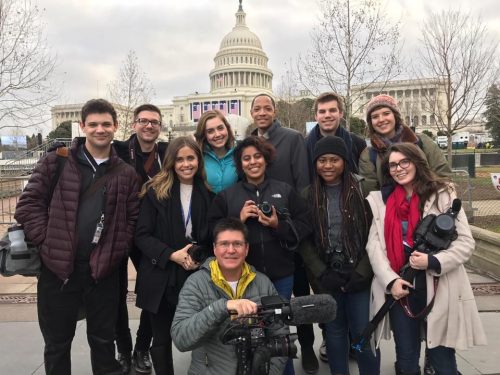 *record scratch*
Yeah, that’s me with the braids. I’m sure you’re all wondering how I got myself into this situation… Photo courtesy: a lovely stranger touring the Capitol via bicycle.

Among those on the trip were nine undergraduate students in varying fields, including photography and broadcasting– all of whom thought they’d be covering the inauguration of the nation’s first female president. Our job was to cover the weekend’s events, including the Women’s March turned occupation of downtown D.C., as if we were professional photojournalists– a task complete with Friday and Saturday project deadlines.

As you can imagine, most of us were a bit apprehensive, and in more ways than one. For one, I had just met this group within the week and, after two class periods, we’d be hopping in a van together to travel the 10+ hours to D.C. only to spend nearly every sleep-deprived hour with each other. I’m 26 years old and, while I don’t consider myself a certified adult, I wondered if the age gap would make it difficult to relate to my classmates.

As a young, black woman, I was concerned with how I’d be received by Trump supporters, even as a simple reporter. I was concerned about the safety of the entire situation for all of us– we’d all been witness to the influx of hate crime since Trump’s election and, for me, the “sudden” division that devastated many had been around as long as I could remember. 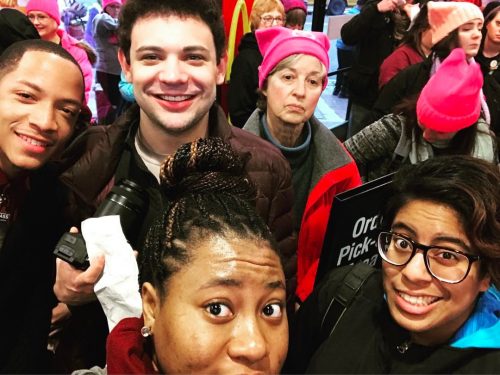 The McDonald’s near the stage for the Women’s March rally was quite understandably filled with people that morning. So when the workers were having trouble calling order numbers, the women banned together to create a telephone-esque call system to help.

That tension turned out to be fairly tangible, but not in the ways we thought. While we were never in any immediate danger, the vibe was a unique one. I felt excluded without anyone ever telling me that I couldn’t be there. I felt like most of the inauguration attendees were a part of an ideological club to which I couldn’t subscribe. Still, while most supporters there were not the rabid ones we’d heard of, there were a few that gave the silent protesters there considerable grief.

But we got out there. And we talked to people and made pictures and video with the goal of showing all sides that day.

The overwhelming crowds we thought would be at the inauguration actually showed up to the Women’s March on Saturday. Every estimation was grossly miscalculated. I remember standing at 3rd and Independence looking in the direction of the National Mall and seeing nothing but people and signs descending into the area– droves of men, women and children there to put a voice to nearly as many issues as there were people. While there are several valid criticisms that have been made, the sense of inclusivity and community was more palpable there for more people.

Overall, the trip was awesome. I got a good running start at some relationships that I think will be around for a while. I conquered yet another situation about which I was terribly apprehensive and proved to myself that I can hang when it comes to this photojournalism thing. I’m still recovering from being on my feet 8-10 hours a day, in 40-50 degree weather, but I have zero regrets. If you have the opportunity to take a J-term class, do it. There are scholarships available to help pay for them and they’re guaranteed to be memorable experiences.

But I have to say, the greatest moment of the entire trip were these amazingly affordable $10 boppy neck pillows we scored somewhere in Ohio. You can’t beat that! These here pillows made the possibility of decent van sleep finally attainable.