Talk about an understatement

What a time to be alive, huh?

Just in case you’ve been living under a rock the last few weeks, our country has gone through quite a few changes.

In the span of a just a few short days, the Cubs won the World Series…

…and Donald Trump won the election.

Talk about a full range of emotions.

This girl right here spent the majority of the first week of November on the edge of her seat.

As a lifelong Cubs fan, this entire postseason was nothing short of amazing. Every time I thought things were going to go badly, my beloved Cubbies came right back.

Seeing and experiencing that perseverance was something that was incredibly meaningful for me, not only as a fan, but as a person.

This semester, as I have alluded to throughout various posts, has been quite the rollercoaster.

Having spent the majority of the past few months inundated with assignments, internships and thesis work, it has become harder and harder to push through.

Watching these games, however, took me back to a place in my memories that was calm, carefree and happy.

During each inning, I had the chance to take a break from my stress and have something that had been missing from my mind for quite some time: hope.

When Kris Bryant threw the ground ball to Anthony Rizzo with a huge smile on his face in the bottom of the 10th inning, it was as if time moved in slow motion.

I know how cliché it all sounds, but even though I only had to wait 27 years to see them win, it felt like an eternity.

The second the team rushed the field, my eyes filled with tears and I screamed and cheered so loud, I lost my voice.

Imagine the emotional high I was on for the next few days, along with the rest of the city. Going to the victory parade was an experience I will never forget, and I know the five million other people that were there with me won’t either. 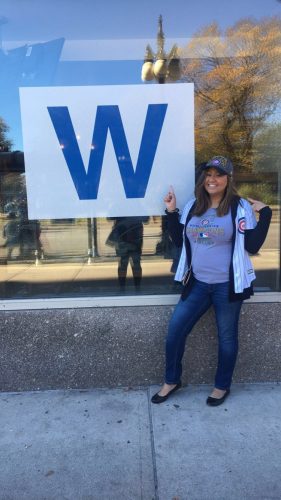 Always flying that W. Talk about a memory made for a lifetime.

Unfortunately, that positive and warm energy didn’t last as long as I would have hoped.

Less than a week later, another momentous event occurred: the 2016 presidential election.

This year, I had the opportunity to work in the school’s radio station, WCRX, as a source writer.

A source writer, in the simplest of terms, is someone that is responsible for producing the latest updates for the anchors during the radio broadcast.

That day, I had the hardest time separating my personal convictions with what was happening.

With every state’s returns that would come in, I felt more and more uneasy.

I was so excited to cast my vote, knowing that our country was so close to breaking through that ever-present glass ceiling and make history. It doesn’t matter who you voted for, as long as you did!

I’ll never forget the end of that night.

The euphoria that I felt the night of Game 7 could not have been more opposite than what I felt when I realized the outcome of the election.

To say I was shell shocked and disappointed is an understatement.

Am I worried for what’s to come in our country? Absolutely.

Am I resigned in facing our future? Never.

The highs and lows of the last few weeks have only proven to me what we all have, an insane amount of strength.

Not every outcome will be what we want it to be, but it is how we respond to these circumstances that shows us who we are.

As long as we ride that wave with every ebb and flow it produces, we’ll be just fine.