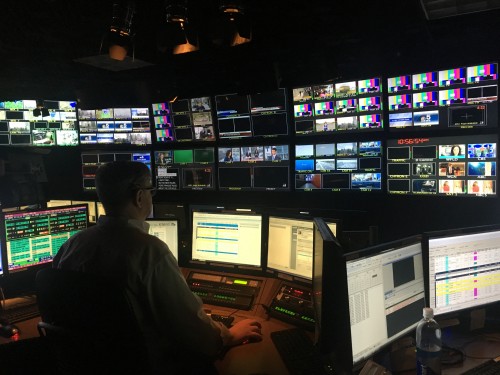 Now, this is what you call a control room

This semester, I’ve had the incredible opportunity to work as an intern in the Midwest Bureau for NBC News.

For those of you that don’t know me (which, honestly, is probably all of you), this internship is something out my wildest dreams.

Because I finally got a shot.

Majoring in political science as an undergrad, I spent the majority of my time convinced that I was going to become an attorney, just like my grandparents and great grandparents before me.

However, it wasn’t until I studied abroad in Paris during my junior year that I realized just how much I wanted to be a journalist.

Fast-forward another 3.5 years and my life hit a standstill.

I had graduated from college, started working in retail (otherwise known as the soul-sucking devil), and was incredibly disappointed and frustrated with the way things were going.

Luckily, just when I was convinced that my true dreams were going to forever be out of my reach, the greatest thing happened: I got laid off.

Now, I know what you’re thinking, “How could getting laid off be a good thing?”

Well, that’s just it. I needed that kick-in-the-pants to happen so I could get my life back on the right track.

I applied to Columbia and, fast-forward another nine months to last November when I was in the thick of spring internship application season.

To me, the idea of getting an internship in the spring was critical. With no prior journalism experience, I knew I had to get the ball rolling in order to learn as much as possible before graduation.

This led to my applying to only one place: NBC.

Like I mentioned in a previous post, working at NBC has been a dream of mine for as long as I can remember. After shadowing Stefan Holt back in September, I knew that I had to take a chance and apply for an internship. The first of many connections and the start of something awesome

I went to our fabulous internship coordinator, Jennifer Halperin and asked for the application.

When filling it out, one of the essay questions stuck out to me.

“What related experience could you bring if selected for an internship?”

I knew I didn’t have the typical “experience” that they were looking for, but I had something even better: heart.

I didn’t care if I didn’t know the difference between a line producer or a field producer, or what a VO-SOT was. I knew that I would give it my all, no matter what.

I took a deep breath and slowly typed out my response.

“If selected for an internship, more so than experience, I would bring a genuine love of learning, relentless drive and unparalleled dedication. Working as a journalist is something that I have always dreamed of doing, but the pain of rejection added a fear to pursuing my interest, which I felt had always been just out of reach. However, every misstep and wrong turn in my life has only fueled the fire to reach my goal. If given this opportunity, I would do my best to produce the highest caliber of work possible and strive to learn as much as I can.”

In other words, I put myself out there and hoped for the best.

On New Year’s Eve, I got my answer.

I got an email for an interview and a week later, I got the internship!

These last few months have been nothing short of amazing. I’ve had the opportunity to work with some of the most talented journalists in the country and learned things that can’t be taught in a classroom.

I helped cover a story on the Chicago State University budget crisis, shadowed a political correspondent at 5 a.m. on Super Tuesday and got close enough to a former president to get this: I know it sounds borderline clichéd, but you really do have to put yourself out there to get what you want. I did, and now, I’ve finally got my foot in the door.

It might not be a lot, but it’s a start.