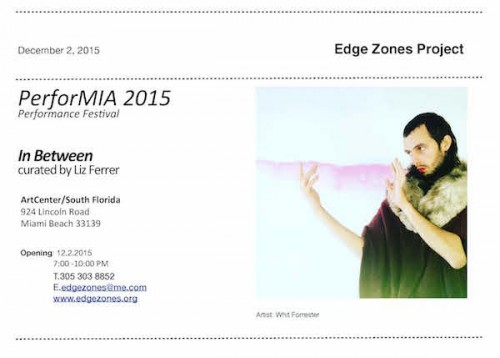 I am pleased to announce that I was invited by Edgezones to go back to Basel this year and perform in their PerforMIA festival.  I cleared it with my professors to get permisssion first, and am happy to report that the experience at Basel is very mixed.

The art world has an axis around money.  People with it thus flock to the galas and celebrations accorded by said world, and with it come all of the fruits and molds of the cornucopia.  I saw a picasso next to a facelift that probably cost more.  I saw alot of wealthy people dressed up in eccentric expensives.  I was also granted several VIP passes and able to go to the Perez Art Museum of Miami which ended up being relatively boring as well.  I was actually overwhelmed with how boring all the VIP events actually were – there didn’t really seem to be any makers there.  There did, on the other hand, seem to be a prolific abundance of wealth.  Ultimately, I find myself curiously confused by these events, and the entire experience at Basel had me wondering “why do these people want to buy this stuff?”  Art has roots in religion, in what Walter Benjamin called aura, and I suppose that is what we are talking about when we are talking about sales is that indescribably draw, that thing which pulls us in and makes us want to possess something for ourselves.  The inevitable comparisons occur in this mental space.  Someone casts a giant piece of cement and paints it bright purple.  “I could do that.”  For alot less that 52,000.  Seeing the place flood though, while absolutely stressful and unfortunate, had a humorous justice to the stuffiness affiliated with this caliber of art worldliness. The unfortunate consequence of miami’s sub-tropical status – lots of rain.

That being said though, there is another feeling, one of honor and reverence for the creative process and an irreverence for the world of money.  A feeling that art would exist without money, and a conviction that in some ways, money would not exist without art.  Thus to propel ones creative efforts towards money, while totally understandable, ultimately probably lucrative and important, there is a justification for also propelling oneself and ones output towards the creative process whatever that is.

The photographic process hinges upon ideas of objectification, and also upon the creation of an object (in most cases – this has changed largely in the digital age).  What I like about performance is that it can happen in front of people and resists commodification.  There can artifactual traces of the experience, but it is difficult to walk away with “the” performance in your hand.  This is one of the things I appreciate the most about the Satellite art fair component of Miami Basel.  It becomes a place on the fringes of this world where it seems like the ideas of collaboration and artist-driven idea pursuits are actually occurring.

The performance at Art Center of South Florida for PerforMIA was fantastic.  Mine was another take at an experiment I had done for a show at The Observatory in Chicago where I dressed up as Justice and then developed 3 cyanotypes of Rome dressed as Justice.  The first, a simple blueprint of the city as it is today.  The second, a blueprint of a catastrophic flood.  The third, a potential future wherein Rome is rebuilt but according to drastically different principles as exhibited by the sacred geometry of the temporary city of Burning Man in the Nevada desert.  A projection of an underwater ROV cam was taking place while Pluto by Bjork was sung over the entire process. 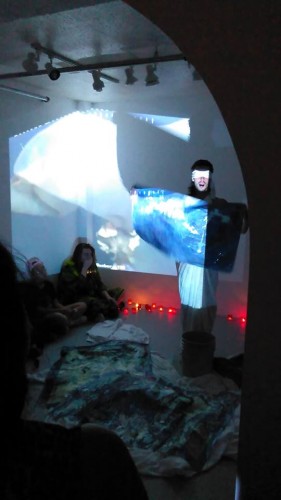 Afterwards, my friends at Edgezones told me about an interesting project happening on North Miami Beach called the Ocean Terrace Hotel.  The Hotel was slated for demolition, and thus given to Tiger Strikes Asteroid as a temporary experimental curatorial space for other artist-run collectives across the country.  In their own words:

“Tiger Strikes Asteroid is a network of artist-run spaces with locations in Philadelphia, New York, and Los Angeles. Each space is independently operated and focuses on presenting a varied program of emerging and mid-career artists. Our goal is to collectively bring people together, expand connections and build community through artist-initiated exhibitions and curatorial opportunities. Find out more at www.tigerstrikesasteroid.com. “

And Satellite:
SATELLITE, a new project series brought to you by Brian Whiteley (founder of the Select Art Fair) and Art Market Productions, will debut this December 1 – 6 in Miami Beach. SATELLITE will populate several unoccupied beachfront properties, with each distinct venue stewarded by notable art organizations and curators. The goal of SATELLITE is to initiate new conversations and to foster experiential and exploratory interactions with art. Find out more at www.satellite-show.com. I was excited to be a part of this project, specifically with the Stupid Bar.  I was friends with 2 collectives therein, Ningun Solicitar and Stupid Bar.  My participation was with Stupid Bar, a conceptual space derived from ridiculous, “stupid” drunken bar culture especially as it parodies larger trends of stereotypical behavior in mainstream society. One of the bartenders at Stupid Bar. You can see me in the far corner behind purple wig (Raine). – photo courtesy of Art F City

Despite all of this activity at the hotel, and my own hopes for art that isn’t instantly commodifiable, I do somewhat mourn the fact that at the end we were notified that the hotel might not be slated for demolition afterall.  A cursory glance at the event page for the week shows this at the bottom:

This event has been made possible by the generous support of Ocean Terrace Holdings, the developer responsible for the vision of Ocean Terrace’s future. Their vision for this section of North Beach, one of South Florida’s hidden gems, is to create a catalyst for the rebirth of Ocean Terrace and upper Collins Avenue and further the area’s revitalization. The neighborhood will once again be a thriving, vibrant center for North Beach residents, and a high quality destination for visitors from all over the world to celebrate life, community, and to enjoy beautiful historic hotels, shops, open spaces, art and architecture.

I am not 100% against development, or revitalization or anything like that however I would be hard pressed to imagine that Ocean Terrace Holdings is going to aim for a North Beach that doesn’t look like the rest of Basel.  Money is one of the axes of the world, and thus it is these temporary spaces which afford artists like myself and my friends the opportunities to explore together at international events like Basel.