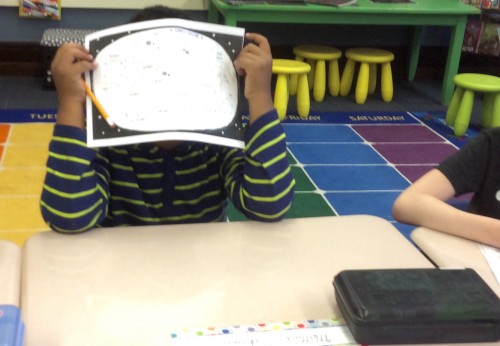 My junior year of high school I had AP French first thing in the morning followed by what some of us called the Johnson Double Whammy: AP US History with Mr. Johnson, followed by Advanced English with Mrs. Johnson. Having my three most demanding classes in a row in the morning meant staying up late every night.  While Mrs. Johnson, Ruth, would come to be one of the most influential teachers of my entire education, things didn’t start out that way. More than a few times I burst into tears because it was 3AM, I was still doing homework, and the end was not in sight. As a teacher, I never thought my Johnson Double Whammy would be an afternoon block of kindergarten followed by first grade.

At the end of a particularly turbulent first grade class I asked the class to evaluate their behavior. They had plenty of great suggestions and I reinforced how much I would like it if we could follow all of those rules and not lose art time to talk about behavior. A little girl raised her hand and told me “We can’t always get what we like.” And that was enough to push me to cry a little later once out of the view of children. I have since developed a few new classroom management skills and had a first grade classroom teacher come and observe me to offer some pointers. But, the primary grades have been my greatest challenge. I’ve been told that beginning teachers go through a lot of crying. The reality of the situation is that I currently have 800 students from the school’s three departments: Neighborhood, Options (gifted), and Deaf and Hearing Impaired. I teach two classes a day off of a cart because the art room is shared with another teacher. I am being challenged to the max and while it has been exhausting, I know that I will be better prepared for my professional career having gone through it.

To convince myself that a few bad days here and there aren’t the end of the world, I’ve been trying to track all of my successes and beautiful things I’ve witnessed just as much as noting my areas in need of improvement. 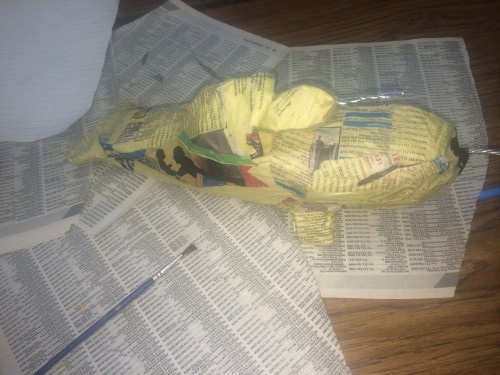 This is a 6th grade sculpture of a narwhal with a little cave on its back that hosts a baby narwhal. 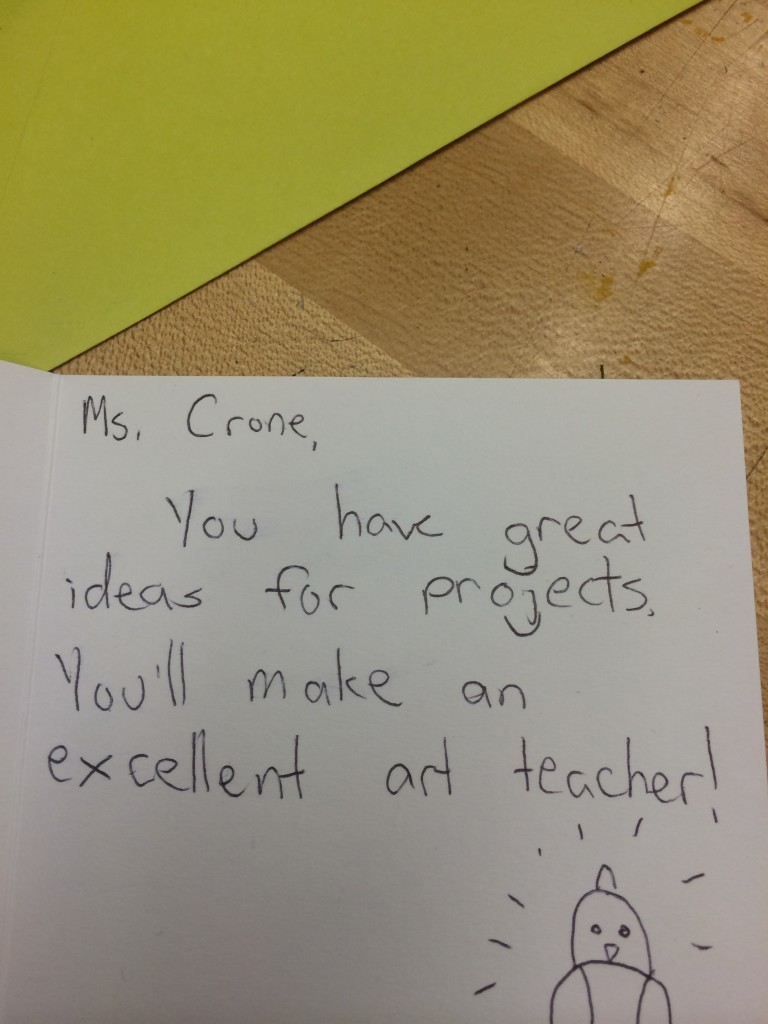 It’s Teacher Appreciation Week and in addition to receiving free coffee, Chipotle for lunch, and flowers, I received this card from a 5th grader. 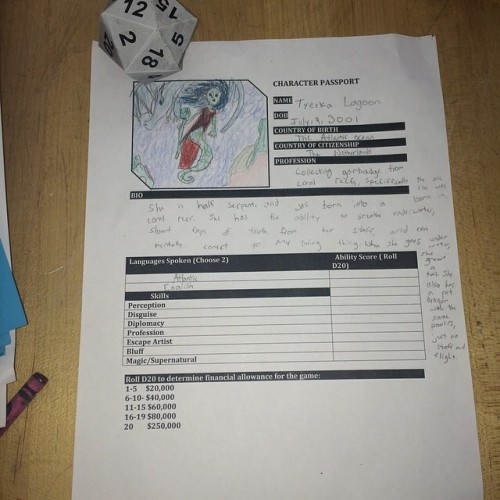 I’ve been running a D&D-inspired lesson with 4th and 5th graders for which they have created their own characters and are learning about Cubism (4th) and Visual Music (5th) as they investigate a mystery of stolen artwork. 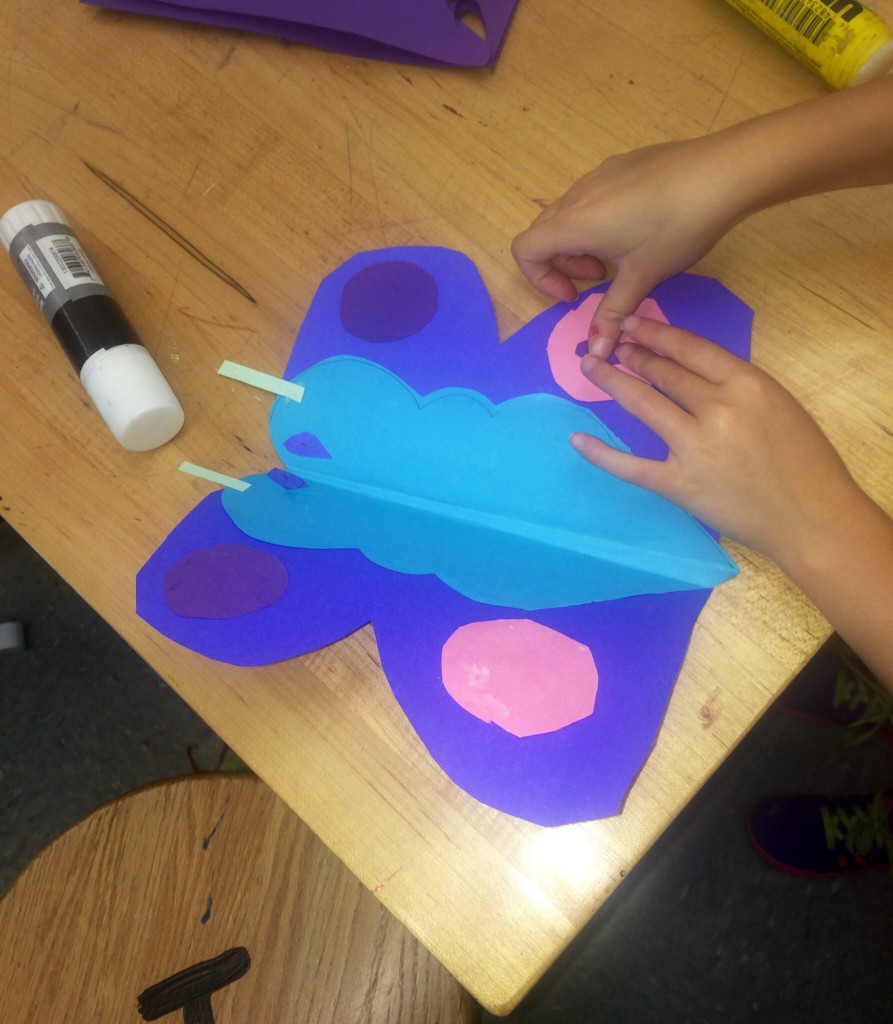 Kindergarten has been learning about symmetry and creating symmetrical insects… One student made me this symmetrical butterfly at home. In a symmetry review activity a table of kindergarteners crafted this portrait of me.

So, even when the days get a little dizzying, I can see that my students are learning.

In other very big news, Dr. Anne Becker and the students of Cohort 22 & 23 have raised over $2,000 to print copies of an activity we put together for children facing extended hospital stays. The Creative Cole Book brought a lot of joy to five-year-old Cole during a month-long stay at Lurie Children’s Hospital following cranial surgery. We look forward to being able to share copies with many more children. By time I post again I will have walked at Columbia’s graduation, though we still have a few more things to wrap up before officially receiving our teaching licenses and Master’s Degrees.