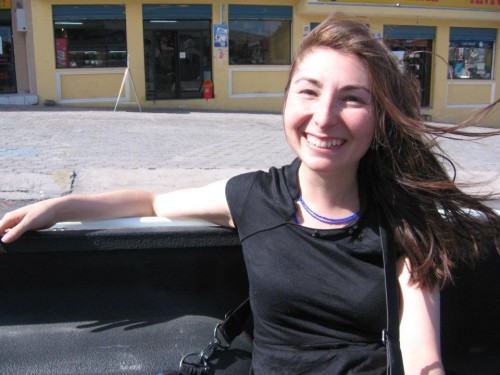 Maria Abraham is a graduate of the Cinema Arts + Science – Directing, MFA at Columbia College Chicago. She entered the program in 2003 and has since become one of the many successful graduates of the program.

Maria’s time as Columbia can be described as an immersive one. While in the Directing MFA program, Maria was able to learn various film forms, such as narrative, documentary, and experimental. She learned editing on multiple platforms, such as AVID, but also on a Steenbeck with real film stock. Not only did she focus on crafting a skill for directing, but was also shown the ropes to other positions within film, such as producing, script supervising, shooting, sound recording, sound design and mixing.

Her experience at Columbia allowed for many opportunities after graduation. Maria was a Fulbright scholarship recipient, which allowed her to travel to Ecuador in order to research and write a feature length film. She is still in the process of working on the feature length borne from the Fulbright scholarship. Also while in Ecuador, she filmed her thesis film for Columbia’s MFA program, called “Girl With Child,” which went on to show at the Chicago International Film Festival, winning the Chicago Award for Best Short, as well as the Aspen Shortsfest, winning the Jury Award for Best Short Short.

Maria’s most exciting experience while attending Columbia was working on her very first short film: “It may sound strange, but I know that I’m a filmmaker, and that’s because of all the experience I gained.  It has helped me to understand story, character, and all the layers of a film.” By experiencing firsthand what it takes to make a film, thanks to the Columbia program, Maria confidently labels herself as a filmmaker. By working on her very first film, Maria learned that she was, in fact, a very capable filmmaker.

As a successful filmmaker out in the field, she advises up-and-coming filmmakers to work on as many sets as they possibly can. To Maria, experience is the key to mastering a skill. By saying yes to working on various projects, whether they are for friends, or as a job, is what allows you to hone your skills and place yourself a step ahead of the pack.

Maria has since moved to Los Angeles and keeps herself busy by working on film projects.

One of the memories that stands out to me is making my first “real” short film.  This was the Directing 3 film.  I was shooting on Super 16mm Fuji with an Arriflex camera.  For the first time, I had a fully-developed story and I was getting to work with a full crew on locations around Chicago.  It was incredible to get to work with so many talented people all toward the same goal, and because of that,  I was getting to see something I had written and imagined become real in front of me.  It’s also the first film I really finished and sent out into the world.  This experience taught me a lot of things; one of them was that I could make films.

I was able to get so much experience making films—my own and other filmmakers’—during my time at Columbia.  It may sound strange, but I know that I’m a filmmaker, and that’s because of all the experience I gained.  It has helped me to understand story, character, and all the layers of a film.  I also took a teacher training class at Columbia and taught production and writing classes in the film department for several years.  Teaching helped me identify and be able to articulate what it is that I think makes a film great and has informed my own work in innumerable ways.

I went to Ecuador for a year on an arts Fulbright grant to research and write a feature film.  I’ve continued working on that project and I made two short films in Ecuador, as well.  One of them—my thesis film, Girl With Child—has had screenings and won awards.  It’s been a really wonderful journey.  I moved to Los Angeles almost three years ago and am working on projects out here, now.

Take all the opportunities that come your way to work on films in all capacities.  Say yes when friends ask you to produce, edit, script supervise, sound design…In my case, saying yes to co-produce a friend’s documentary in Ecuador one year led to my own Fulbright grant project a few years later that was life-changing.  Make narratives, documentaries, and experimental films.  Travel to make films abroad.  You’ll have to figure things out on the fly and then you’ll know you can get the shot/audio/performance no matter what.  Navigate the world around you with eyes and ears wide open for stories, characters, imagery, sound.  Also, read Filmmaker Magazine’s 25 New Faces of Film edition each year.  Each profile will tell you about grants, fellowships, labs, and strategies for making your own films that have been successful for others.