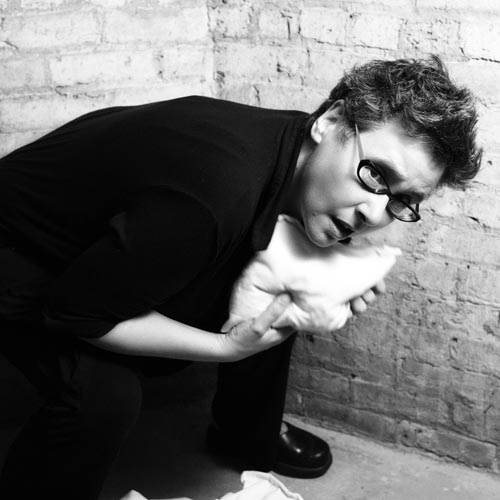 Jenny Magnus is a prolific maker, an influential presence in Chicago’s theatre scene, and has become one of my creative heroes over the last three years. The Chicago Reader recently named her “One of fringe theatre’s most literate scribes.”  As a founding co-artistic director of Curious Theatre Branch, she has written and produced a few dozen of her own works. She has helped form a number of amazing chicago bands among them being Maestro Subgum and the Whole with which she has released 9 albums. She has produced work at Steppenwolf Theatre, the Museum of Contemporary Art, and at venues throughout the US and Europe.  She has also been the cocurator of the Rhinoceros Theatre Festival for the last 25 years, which is now the longest running fringe festival in the City of Chicago.

Last February, Jenny released her 400+ page collection of plays and performances entitled Observations of an Orchestrated Catastrophe. The book consists of nine of her most popular works including: The Willies, The Trips, The Lucky Ones, The Strange, Round and Round, How to Carry Love, Room, Nowhere But Up, and Still In Play.  The book was published by jackleg press.

In celebration of the release of her recent book, a number of Chicago’s favorite performance practitioners and theatre companies got together to produce 7 of the 9 plays from her book. This resulted in what Justin Hayford of the Chicago Reader described as, “The most ambitious, comprehensive retrospective of a playwright’s work Chicago has ever seen.” This “Jennyfest” was billed Magnus in Play and ran for the last 4 days of this years Rhinoceros theatre festival.

Not only is Jenny a brilliant maker of stuff, she is a fantastic educator who considers teaching an important part of her art practice. Her teaching philosophy draws from both John Dewey’s Experiential learning and Paulo Friere’s Pegagogy of the Oppressed. She emphasizes experiential learning with the belief that learning comes from doing and sees her role in the classroom as being a “facilitator and composer of experience.”

I can’t recommend working with Jenny enough. Some of the classes Jenny teaches at Columbia Include: Drama: Theory and Practice, Media Performance, Connected Images, Connected Studio Practices, and Performance Aesthetics. For more information on Jenny Magnus and her work, check out jennymagnus.com.