From my experiences going to film premieres of my undergraduate projects, watching the films in a full theater was always enjoyable. It was great to hear reactions from the audience based on the film as a whole. In addition, it was nice to hear the music and sound effects in a large theater, with a decent stereo speaker setup. I try to go to as many movie showings as I can because hearing the soundtrack through the high fidelity speakers is a greater experience than watching these films in my living room. Currently, all large professional theaters have surround sound ranging from Dolby Digital 5.1, Dolby Digital 7.1, to Dolby Atmos. These set ups are highly evolved from early film sound. In the beginning, there was just one speaker behind the screen. Now with Dolby Atmos, there are roughly 60 speakers, each with individual control. These speakers completely surround the audience, with an array on the ceiling. Take a look at Dolby’s video about the past and present of surround sound.

Chicago is lucky enough to have two theaters equipped with this new technology, first implemented in 2012. Recently, I viewed my first film in Dolby Atmos, Noah, at the Showplace Icon Theater (a short walk from campus). Not only is there more control over where to place the sounds, but the audio sounds fuller, and clearer. The ceiling speakers really stood out with precise rain sound effects and lightning claps. This week, I saw Muppets Most Wanted in 5.1. After hearing the quality of Atmos in a humongous theater, the sound of 5.1 in a relatively small room sounded weak. One of my long term goals and a goal of my cohort is to hear our music where it is intended, in a large theater with state of the art audio technology. We discussed in class how some soundtracks like the Social Network and The Dark Knight utilize surround when mixing the music. This creates a feeling of immersion in the film, more so than if the music is just in the front left and front right speakers. I am excited to see more innovation in music mixing with advanced surround sound techniques. 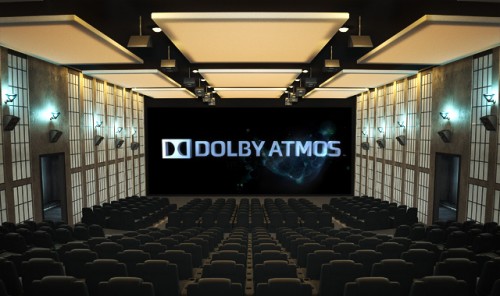 Since it is a newer technology, not every film is mixed with Atmos. I imagine having so much control can make the process of mixing take longer. However, more and more films are adapting this new format. Some Atmos movies I know I will be seeing this Spring/Summer include Rio 2 (Beth Caucci, a graduate of this program, worked on the digital score production) X-Men: Days of Future Past, and The Amazing Spider-Man 2. Take a look at the full list of movies being mixed in Atmos here.