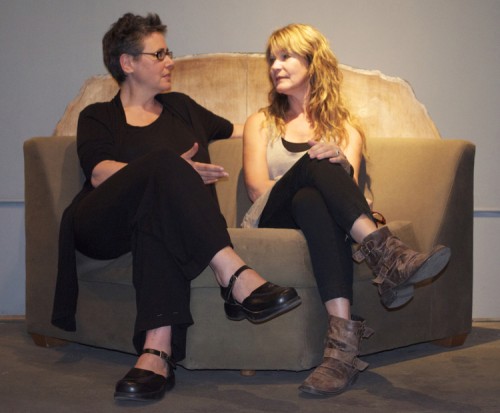 This summer I had the privilege of working with Inter Arts Faculty members, Sherry Antonini and Jenny Magnus, as part of their Creative Push Collective.

When I first came to Columbia I had the privilege of taking a few classes with Jenny and Sherry.  The first two classes I had were with them which were Drama Theory and Practice and Word Theory and Practice.  Both classes ended with one final performance. The text written in text class was used in a performance for the drama class which was performed at the Prop Theater. The second class I took with them was a week long intensive class called Connected Images. This was such an amazing class. Each day had a different theme and different prompts to help students generate material towards either a concise body of work or an interdisciplinary project. The class was amazing. I couldn’t believe how much I accomplished in that five-day intensive. Jenny and Sherry were amazing and have been some of the biggest sources of inspiration to me here in Chicago. They are great artists and tremendously gifted educators. So, I was super excited when I heard about their new project, Creative Push Collective.

What is Creative Push? I think their website says it best, “Need a gymnasium for your artistic mind? A place to exercise your imagination? Need trainers to guide you through exercises designed to add stamina and definition to the muscle behind your creative process? We are your CreativePush Collective, a duo of trained and degreed facilitators with two decades of expertise in composing workshop and practicum experiences that ramp up articulation, realization, and problem solving in creative endeavors. Following our own carefully crafted curriculum program, you will generate new ideas and/or build on in-progress concepts toward expanded making and refinement of your work. Whether you are a current art student, a mid-career artist, a parent working from home, or corporate manager in need of boosting the creative energies of your employees, we can help catapult ideas into action. Gain a clear understanding of the creative process toward realizing ideas and making work that, both in concept and crafting, builds confidence in knowing how to make it to the finish line. So go ahead, make a mess. We’ll help you make it into something more.”

I approached Jenny and Sherry at the beginning of the summer because I was interested in what they are calling the Rhino Charge, “a customized process of performance and/or media production leading toward a showcase in the Rhinoceros Theatre Festival in Chicago.” I began with no more of an idea than I wanted to have something for Rhino Theatre fest and I wanted to have some more musical elements than I have had in recent performances. We met a few times over the summer. Each meeting they gave me customized assignments and workshops to help me generate material and think about the project in new ways. I left each session with them inspired and encouraged to move forward confidently with the project. I will continue to work with them through the semester and winter break, culminating in a final performance at Rhino Theatre Festival. If you’re an artists of any kind and need a little creative push. I highly recommend working with them.