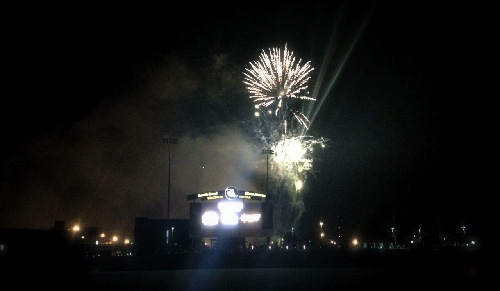 Fireworks after the baseball game.

Because I’m asked so often about the differences between the Irish and Americans, you’d think at this stage I’d have a more polished answer than “ahhhhh…. whatever, guy.”  But, because of global syndication of television series like Friends, the world I grew up in was a Westernized one, and so it’s hard to identify key cultural differences. Living in the Midwest this past year, I’ve found it really homely and am met with rural sensibilities that wouldn’t be out of place back home. Spending this summer between Indiana and Michigan, I’m flanked by green fields that remind me of the drive to my grandmother’s farm in Wicklow. That uniquely Irish dry and sarcastic sense of humor is not wasted here either. Just maybe the most tangible difference I can put my finger on is that, for the sake of spellcheck, I now spell words like Westernized with a ‘Z’ instead of an ‘S’, or have a ‘sleep in’ instead of a ‘lie in’. Lye in? However it’s spelled, it rarely happens anymore.

These last few days, however, I got to experience something uniquely American. Before this week, Independence Day was a Will Smith blockbuster, or a reminder that it was my good friend Vickey’s birthday.  But, now, my first Fourth of July holiday will forever be the time I went to my first baseball game–South Bend Silver Hawks vs Fort Wayne Tincaps–ate barbeque ribs, and hung out in Al’s Supermarket parking lot drinking beers with fireworks detonating all around and illuminating the night sky for miles. 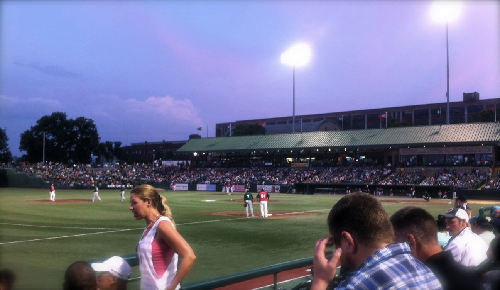 Fourth of July might be a fun time to get together over some beers, something us Irish also do well, but beneath that it’s about celebrating America’s independence and the freedom of this young nation. Mulling over these last few days and writing these words reminded me of a post I wrote last year not long after I moved here, about how I felt like a stranger in a strange land. Though it concluded by saying that cultural differences force us to see the world in a different manner–such as these last few days have proven–I’m glad, too, that I now feel so at home in a land that has welcomed me with open arms.

And might I remind you that it does not say RSVP on the statue of liberty.