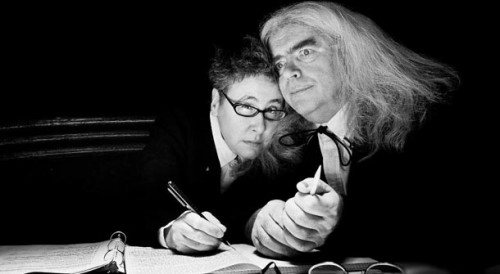 Jenny Magnus is one of the best educators I’ve ever had the privilege of studying under. I’m really excited to be taking Media Performance with her next semester. Last year, Jenny was the artist in resident at the Museum of Contemporary Art Chicago. She is also co-responsible for the longest-running fringe theatre festival in Chicago, Rhinofest.

Rhinofest began 24 years ago inWwicker Park. It has provided performance exhibition opportunities for hundreds of artists, many of my friends included. This year, my friend Monica from the Interdisciplinary Arts MA program will be performing her piece, “Branch and Bough”.

Erica Mott will be performing her Victory Trilogy, for which I had the privilege of doing some projection work. I thoroughly loved this piece when I saw it performed over at Northerly Island, and I highly recommend it.

I’m also really excited to see Curious Theatre Branch’s original performance, All the Ways to Hidey Hole: Madras Parables. This will be performed by both Jenny Magnus and Beau O’Rielly, considered two of Chicago’s most important names in theatre.

I had the privilege of attending last year, and it was a delight. One of my goals for the next year is to create something to perform at Rhinofest.

Be sure to check out one of the awesome shows at Rhinofest. Also, feel free to send me a message if you’re interested in seeing anything to which I might like to tag along with you. Also, if you are a Chicago-based performance artist, you might just want to check it out to see if this might be a good venue for you to perform in. If you are interested in writing and seeing if you could perform something next year for Rhinofest, you might be interested in checking out, “Creative Push Collective’s Rhino Charge”, which is a series of workshops designed to prepare you to showcase a work at Rhinofest.

Again I hope everyone is having a wonderful new year, and remember to come to a performance at Rhinofest!