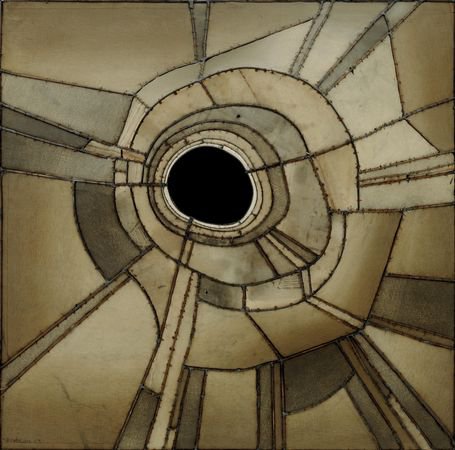 One of my absolute favorite artists of all time is Lee Bontecou. There are many reasons why I am inspired by and respect her art and career. I am enticed by her experimental use of materials and ways of making.  She created work in a wide variety of mediums, ranging from: welded steel, canvas and wire sculptures to graphite or soot drawings on paper or muslin to vacuum formed plastic sculptures. Some of her other mediums include colored pencil, charcoal, leather, epoxy, silk, wood, casein, porcelain, and Plexiglas.

She espoused no singular method of working, and she erased some of the boundaries between sculpture and painting/drawing. Her drawings create worlds that invite the viewer in, making them as sculptural as her 3-dimensional work, and her immense sculptures were mounted to the wall in the presentational style of paintings.  I am moved on a visceral level by the power of these immense sculptural images. Their black voids conjure up spaces in the psyche in which to, in Bontecou’s words, “glimpse some of the fear, hope, ugliness, beauty and mystery that exist in all of us…” 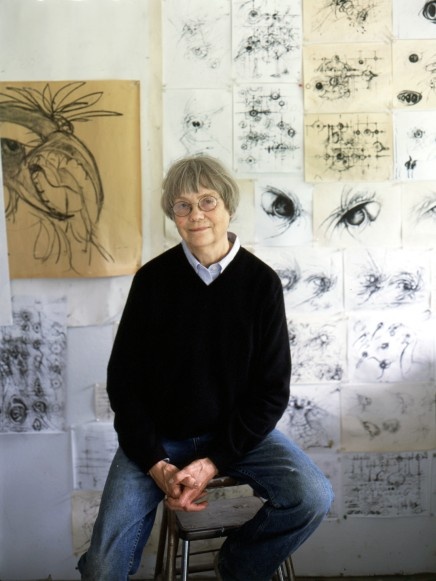 She has created her own language and iconography within her vast body of work, and she refuses to limit its interpretation. Critics and historians have classified her work as: feminist, minimalist, post-minimalist, latter-day surreal, futurist, and arte povera. Regardless of the interpretations and readings of her work, of her own work, Bontecou said that she intended to encompass “as much of life as possible – no barriers – no boundaries – all freedom in every sense.” And, in this statement, I sense a kindred spirit.

Lee Bontecou was born in 1931 in Providence, RI and raised in New York. She attended Bradford College in Massachusetts and the Art Students League in New York from 1952–55 where she studied sculpture under William Zorach. In 1954, she attended the Skowhegan School in Maine. She received a Fulbright to study in Rome in 1957–1958. She began exhibiting her work in Italy in 1957 and found great success in her art career during the 60s, exhibiting at the Sao Paolo Bienal, The Museum of Modern Art New York, The Corcoran Biennial, in Washington, DC, the Pasadena Art Museum in California, the Galerie Ileana Sonnabend in Paris, and various museums throughout Germany. In 1972, an exhibit of her sculpture and drawings was presented at the Museum of Contemporary Art in Chicago. A few years after that, she left New York and moved to Pennsylvania and began teaching.

She divorced the art world as an exhibiting artist for almost 30 years, ignoring or declining invitations to show her work. In 2003, a retrospective of her work, which included the art she made during her decades-long retreat from the public, was organized by the Hammer Museum in Los Angeles and the Museum of Contemporary Art in Chicago. I was fortunate to see this show. This exhibit also traveled to the Museum of Modern Art in New York in 2004. At 81 years old, she continues to create and exhibit. Her work was recently exhibited at Freedman Art in New York, October 2011-February 2012. 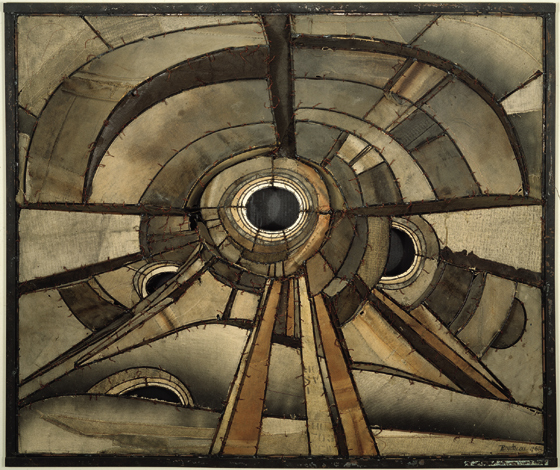 I end with a quote from Daniel Baird’s 2004 article in The Brooklyn Rail, “Lee Bontecou: A Retrospective.” He states:

Bontecou’s work has always been richly allusive, but it is also opaque and difficult to co-opt… It is telling that for more than forty years, Bontecou has resisted genre boundaries and art world ideologies. In an art world still struggling to balance conceptual depth with intuitive sensual immediacy, Bontecou’s career should serve as a model.