This post could be about any number of places. I decided on the Wormhole because I’ve been going there a lot lately and therefore it seemed most organic, but the point I’m going to make is applicable to many places. That point is this: there are many very cool venues in this city.

In this case it’s as simple as a coffee shop done right. The Wormhole’s theme is taking patrons back in time to the era of super pixelated video games and cheesy, awesome movies. Movie posters adorn the walls, there are retro video game systems to play with on the TV, and the DeLorean speaks for itself.

Yeah, as in Back to the Future.

Maybe that’s not awesome to you. I don’t know why that would be, but whatever. The coffee’s also fantastic if you’re a coffee snob, and if you’re wondering why someone would ever be a coffee snob this is one of the places you can find out (by coffee snob, I don’t mean super sugary Starbucks drinks, I mean good coffee).

The clientele adds to the vibe, as does the music (no it’s not retro necessarily, but it is on the hipper side if you’re really only into Top 40). The place is, in general, a very well done version of itself, and its identity is pretty great.

The point isn’t just about this coffee shop in particular though. The point is a place like this survives in Chicago, because in a way, being specialized like this is what gives it an edge. Could a place like this pop up in a college town or even a suburb? Sure. The odds are smaller, though. That’s what a huge population will do for you. 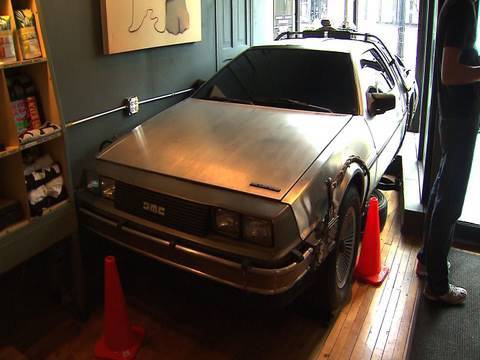