While looking for various immigrant groups in a Muslim community in Albany Park, I came across something completely unexpected…

A woman from Iowa.

Well, as the saying goes, when life gives you lemons, eat the lemons and then find something better to eat.

Anyway, she wasn’t just any woman from Iowa. She just so happens to be the co-founder of the Institute of Islamic Information and Education, located at 4390 N. Elston. 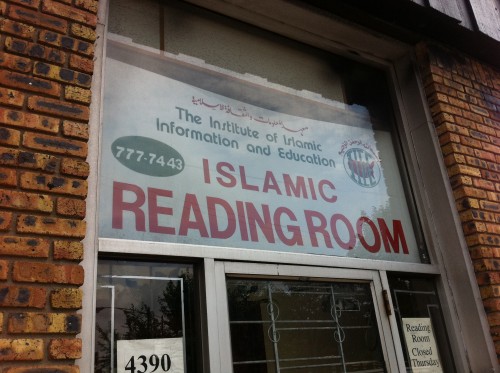 Mary Ali is not an immigrant. She’s from a small town in Iowa, or as she describes it, “Northwest corner. A little town named Sheldon.”

She founded the Institute with her husband, Dr. Amir Ali, 25 years ago.

She said the most common visitors to the institute are college professors who bring their classes on field trips to get a closer look at various religious organizations.

I ask her what some of the common misconceptions about Islam are.

“That Muslims are violent. That’s the most common one lately. And that jihad means that you can go kill somebody,” she said.

Recently, several countries, including France, Italy, and parts of Spain, have banned the burka and, in some cases, the headscarf, in the public sphere.

But Ali said there is nothing inherent in the teachings of Islam that oppress women.

“In fact, as far as women are concerned, they’re given more rights in Islam than anywhere else in the world,” she said.

“They alone determine what happens to that wealth. Their husband can’t say, ‘Oh, well you can pay the rent.’ He’s got to do it. He’s got to support her,” Ali said.

And, she said, the headscarf, or hijab, is worn out of modesty and to shift the focus to what’s going on inside a woman’s head, rather than what that head looks like.

“The effect that it has is that people appreciate what you can say and what you can do, rather than what you look like,” she said. “And it avoids the exploitation of women.”

Ali said the burqa, the long black garment worn by some Muslim women, is not true to Islam because a woman’s face is not required to be covered.

“But even now when I go to get my picture taken for my drivers license, I tell them I have my head covered because it’s a religious requirement. And they accept it.”

“Took a while,” she says, laughing.