It’s been 5 years since The Lego Movie premiered to pleasantly surprised audiences. Before its positive reception, everything about the movie from its product-placement-premise to it’s shockingly uncreative name seemed to spell Super Mario Bros level disaster. It seemed impossible that a toy-branded big-budget movie could be charming, funny, original, and genuinely heart-felt, but just like Pirates of the Caribbean proved years earlier, a cheesy premise doesn’t always result in a unpleasantly cheesy movie. The first Lego Movie’s success was followed by a string of similarly branded but disappointingly soulless films, starting with Trolls and hopefully (but definitely not) ending with the upcoming UglyDolls. The first Lego Movie still stands alone as a fantastic example of how heavily branded content can go right. Going into The Lego Movie 2: The Second Part, it seems that the biggest hurdle to clear is topping the charm and wit of its predecessor, but this time without the advantage of low expectations.

The Lego Movie 2 picks up right after the end of the first movie, when the heroes were introduced to an invading force of toddler toys that represented their human counterpart being forced to let his little sister play with him. After that alien-invasion-esque first encounter, the plot jumps forward a number of years to a future of desolation and terror. The formerly happy and joyous Bricksberg is now a Mad Max style hell-scape, complete with sandy wastelands and lots of brooding. The action picks up when all the main characters but Emmet are kidnapped by a mysterious figure from the Sis-Star System and taken back to her home planet for unknown purposes (a.k.a., stolen by the little sister and taken to her room).

While the real-world story of the first Lego Movie centered around a Cats-in-the-Cradle-esque father/son relationship, The Lego Movie 2 focuses on the relationship between siblings as one of them grows old enough to want to put “childish” things behind him, and the other still strives to create a friendly brother/sister bond. The older brother’s resentment towards his little sister and his desire to be “grown up” and “cool” are represented by Rex, a badass and stubble-adored mystery man who shows up to help Emmet save his friends. Emmet’s optimistic disposition is the perfect foil to Rex’s hyper-masculine bravado and lone-wolf temperament. Just like his real-world counterpart, Emmet is tempted into rash decisions and violent solutions by the promise of being seen as more adult and macho. Rex represents the urge to push down affection and empathy towards a sibling in favor of maintaining a reputation, something that many older siblings can relate to. 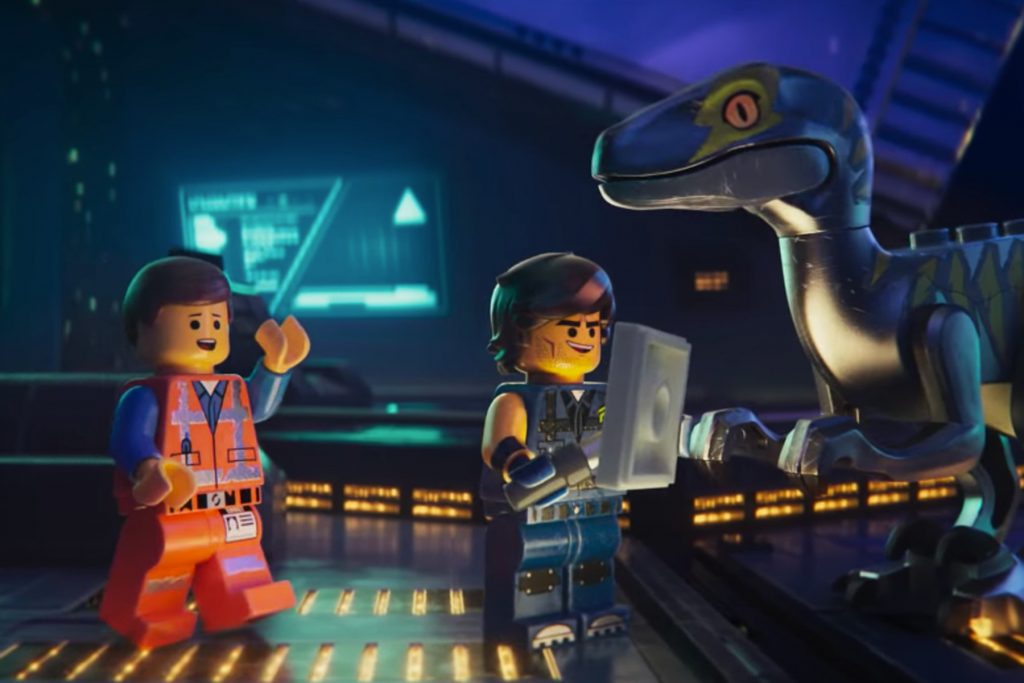 While The Lego Movie 2 does handle its sentimental theme perfectly, it falls just short of recreating the joy and whimsy of the first movie. This could be due in part to the expectations that the audience inevitably has when they walk into the sequel to a movie that surprised and overjoyed them. It’s also probably due to the fact that the worlds that were explored in the first movie are no longer as novel, and the Playmobil aesthetic of the Sis-Star System doesn’t exactly heighten things enough.

But mostly, it’s due to the irritating inclusion of a series of musical numbers. During these repetitive and underwhelming songs, The Lego Movie 2 reminds you of the fact that it’s still a kids movie, and oftentimes kids movies include parts that exist solely to trick younger viewers into begging for whatever monetary element they’re pushing. There’s little doubt that right now, around the country and perhaps the world, many parents are driving their kids to and from school while slowing being driven crazy by Catchy Song (This song is gonna get stuck inside your head), which was written to be as annoying and catchy as possible by Jon Lajoie of The League fame. Surprisingly, while effectively annoying, Catchy Song is actually the only redeeming song of the movie due to its cheeky nature. But the other songs, while entertaining at first, end up dragging on and making you wonder why on earth the studio opted to include these shaky-at-best and boring-at-worst musical elements.

But even though The Lego Movie 2 doesn’t quite measure up to The Lego Movie in terms of execution, it’s still extremely funny, charming, and poignant. The cheesy musical numbers don’t negate what is still a fun and unique premise, even if its a premise that’s no longer as fresh as it once was. The Lego Movie 2 builds the first movie’s world out into a more lively and complex universe, and even though it does hit a few bumps in the road, the resulting movie is still a blast to behold.