Tim Seeley is a Chicago based writer and illustrator who has worked on a massive amount of the comic industry’s most popular characters and titles. Batman, G.I. Joe, Transformers, Hack/Slash, Revival, Green Lanterns, Superman, Grayson, Nightwing, and Wildcats are all just of few of the many titles Tim has helped shape.

Tim broke from his busy schedule of working on a bunch of DC projects to give us some insight into what it’s like working in the industry.  Needless to say it was a great opportunity the In The Loop staff instantly seized.  We grabbed our cameras, recorders, and questions and stepped into Tim’s studio in Chicago’s Lakeview neighborhood.

IN THE LOOP: Can you tell us how you became interested in comics?

TIM SEELEY: When I was a kid I lived in a really small town with not a lot of access to anything. We had corner stores and I would always get comics there and I loved them, in a way that I was just sort of obsessed with comics. Something about it just communicated to me, so I was always making comics as a kid.

I think there’s something about comics for some people, that if you saw them at a certain time, it just latched on to your brain and you just couldn’t get rid of it. ITL: What are three aspects or principles of illustration a student should learn if they want to work in this business?

TS: First and foremost, absolutely life drawing. I think there’s a tendency, you’ll see a lot of kids who come up like “I read manga, I watched anime, I don’t need life drawing because I know how to draw this style.” Style has nothing to do with structure, so it’s extremely important to know your life drawing.

Also I think having any sort of sense of storytelling, whether that comes from a literature background, or from illustration specifically. The ability to tell a story is extremely important, it’s not just a drawing, it’s a drawing that has to emote something.

The other one with I would say is business classes. There’s a tendency for artists to not know anything about the way business is done. You have to send out vouchers to get paid, you need to know how to incorporate, and how to manage taxes. I wish more colleges taught art business classes. I’ve had to do this stuff myself, and the backup that I have is that I took a business course in college. I could probably have used an entire separate degree for art business.

ITL: How important is it for people starting out in this field to develop their own unique style?

TS: There’s a tendency for younger people to focus too much on style. Style will happen. Style is what happens once you know the rules and then break them.

Being who you are, the length of your fingers, the way you put your arm, the way you sit, the things you liked as a kid will cause you to have a style.

I think the fundamentals are more important than style.

You should always have influences and things that inspire you, but you should also keep your mind open to things that may come in and surprisingly inspire more.

Going to the art museum and going to the library and trying to catch up on stuff from the past are really important. You may find things you didn’t know you were into.

ITL: How many projects on average are you working on at one time?

TS: It’s about five a month. I’m either drawing a book and writing another one, or I’m writing four books or maybe five which is rough, because they take you about a week apiece. That’s just the way the comic industry works. It’s a periodical, so there are powerful deadlines facing you all the time. Things come out every month, in some cases every two weeks.

ITL: What do you do to unwind from a stressful day or workweek? 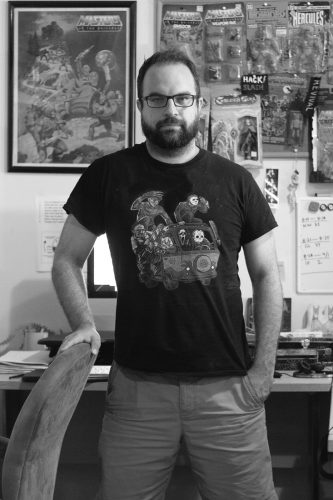 TS: I feel like going out and socializing is actually kind of important after you spend all day staring at a screen trying to think about how people talk or trying to draw people.

I do go out, it’s partly relaxation and it’s partly the fact that I sit alone in my own head all day.

ITL: If you could send a tweet back to your sixteen-year-old self, what would you say?

TS: I would warn myself that this is a business. I think because comics are able to communicate with the reader so intimately, there’s a tendency to believe that the businesses are as good as the superheroes, as moral as the superheroes.  It’s not.

I would have told myself this is a business, get that part of it together, don’t trust everyone.

That’s something I didn’t perceive and I’m sure many kids don’t.

How long do some of your ideas to create in terms of story writing?

TS: I wish I could say they take more than a week, but it’s pretty much a week because a majority of the time I get a script assignment, it’s a Wednesday. I have to have it done by the next Wednesday, so in the meantime I try to generate conce­pts. Maybe have a notebook full of rough ideas that I want to come back to.  The one thing that you find when you work in this is that whatever project you’re working on right now cannibalizes all your other ideas. You need a Batman story? Well you had this story that you we’re gonna do for years that you love, but you got to fill that page, so there’s a tendency for your current projects to eat your other ones.

What is a good book that you feel a student could learn from by reading?

TS: I think you learn from all of them. I do think as far as comics go, there’s a couple of books which I always pushed people towards and they’re always the ones that talk about sequential art: Understanding Comics by Scott McCloud and Sequential Art by Will Eisner.

How influential were your professors when you were in school studying illustration?

TS: There are two that really stood out to me. One art professor sort of made me realize that ideas are not really worth anything, you have to make something. People sit around and kick around partial ideas like “I have this idea I’m thinking about.”  Just start creating it, and then ideas will react against that idea, which I think is really important.

I also had a really good art history teacher. I was a kid from central Wisconsin with a limited view of the world. She kind of helped me see all these other people making art for different reasons. I think that’s especially important in the world right now, these quieter voices that used to get pushed down now have access. It’s important that we sort of understand that stuff and help it thrive. 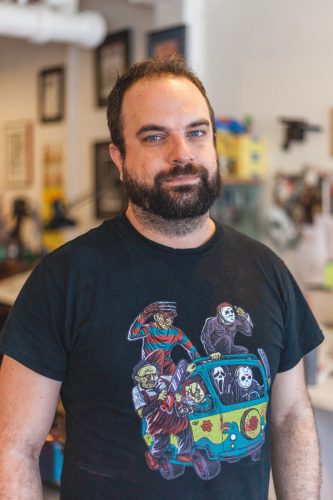 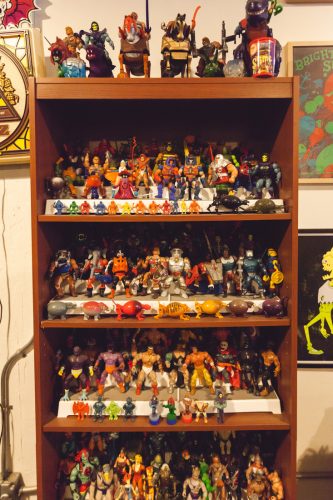