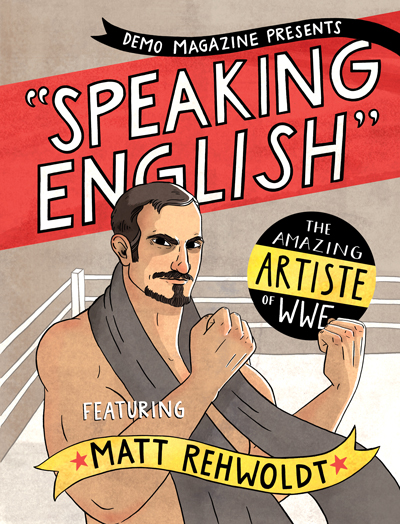 Sporting a waxed moustache and an over­coat thrown over wrestling tights, Aiden English struts his lean and muscular frame down a runway alongside his tag team partner Simon Gotch, a strongman throwback you might find pressing barbells at a carnival. The arena music erupts into ragtime piano. Instead of exchanging high fives, The Vaudevillains magnanimously shake hands and pose for fisticuffs straight out of a silent film—a decidedly artistic entrance for the World Wrestling Enter­tainment (WWE) stage.

Approaching his wrestling persona as an “artiste,” English has been known to enter rings singing show tunes. Sometimes he croons out a lullaby as he brings an opponent into an inescapable headlock. And with the April 2017 news that Gotch has been released from the WWE, English will be flying off the ropes solo for a while. But the self-styled 19th-century thespian now works under the biggest bright lights of his dream career.

English, better known as Matt Rehwoldt ’10 during his Columbia College Chicago years, has pursued professional wrestling since he was growing up in La Grange, Illinois. His parents didn’t have cable, so WWE’s Monday Night Raw became a sort of forbidden fruit. Rehwoldt was hooked from the moment he overheard grade school classmates raging about professional wrestling as they practiced fake fighting. The humor and dramatics appealed to him, and he eagerly took to the sport perhaps most associated with performance art. In fact, Rehwoldt only matriculated to Columbia to study Theatre after striking a deal with his parents, who discouraged him from going straight into wrestling.

It’s a terrifying experience, but getting through it is very rewarding.

Yet Rehwoldt says his four-year college detour thoroughly prepared him for the theatrics of WWE. In Chicago, he transformed himself from a shy kid to someone who could woo a live crowd. “You crave that sort of attention and affirmation from an audience,” he says. “It’s a terrifying experience, but getting through it is very rewarding.” With a wrestling persona inspired by vaudeville days of yore, Rehwoldt has been known to enter the ring belting show tunes to intimidate his opponents.

The chance to forge his own artistic path at Columbia also appealed to Rehwoldt. He found his way through a stage combat class taught by David Woolley, developing a strong stage presence and learning a few performance tricks along the way.

Of course, he learned things about the importance of diction and the muscle memory required of live performance.

“But the bigger thing was learning about taking beats and making moments really count,” Rehwoldt says. “You’re constantly trying to find the emotional arc of whatever story you’re trying to tell. Those are all the things we’re trying to do in the WWE today.”

Post-graduation, Rehwoldt scored a role in The Elaborate Entrance of Chad Deity—a Chicago-born dramatic comedy and finalist for the 2010 Pulitzer Prize for Drama—which tells the story of the American world of professional wrestling. He also landed some professional stage time at the Lyric Opera of Chicago, where he performed in Macbeth as a non-singing character.

In January 2011, Rehwoldt moved south for a three-month course at Florida Championship Wrestling, a training ground for the WWE. After someone suggested he team up with Gotch, a sort of likeminded traditionalist, the idea for The Vaudevillains quickly emerged. The duo perfected their craft in the Sunshine State for a couple of years and began wrestling on the larger WWE stage in 2016. Nostalgic by nature, Rehwoldt holds the wrestlers who inspired him as a kid in high regard. Legends such as Ric “The Nature Boy” Flair, Shawn Michaels, and Stone Cold Steve Austin combined great theater with spectacular wrestling skills. He’s also a student of the game, learning about WWE greats like Gorgeous George and the villainous Killer Kowalski. “I have a great deal of appreciation for the legacy of wrestling,” he says. “A lot of these guys were wrestling in small armories with one light above the ring just to make a living.”

The armories are a stark contrast to today’s hordes of fans showing up for events inside venues like Madison Square Garden in New York. But this is English’s world today: on the road every week, in WWE primetime—as big as it gets in professional wrestling.

Still, he’s aware of wrestlers like Dwayne “The Rock” Johnson and John Cena, who’ve made the leap from wrestling ring to the silver screen. Rehwoldt, however, has a very classic, specific goal. “Part of me would love to do movies,” he says. “But I want to be the first WWE superstar to perform in a play on Broadway.”

An aluminum ladder jabbed into a chest. A body slam into a blanket of mousetraps. One screaming crowd, an infinitum of weaponized props, and a line-up of 30 madcap performers: This is the magic of Chicago’s Freelance Wrestling. Ever since he was a kid, Photography alum Jack Edinger ’06 has admired the art of wrestling. As a student at Columbia, Edinger spent his free time touring the gutsy Chicago wrestling scene, even writing his senior thesis paper on the aesthetics of underground wrestling. That’s when he met Nick Almendarez—better known by his professional wrestling name “Matt Knicks.”

“Wrestling is a huge part of my life,” says Edinger. “It’s no surprise that my obsession led me to Nick, and thus Freelance Wrestling.”

Edinger met Almendarez at Resistance Pro Wrestling, an independent wrestling company founded by vocalist and guitarist Billy Corgan of the Smashing Pumpkins. After several months of shooting video and photography for Resistance Pro, Edinger was approached by Almendarez with a wild idea.

“We both knew a ton of great wrestlers who weren’t getting gigs,” says Edinger. “Nick suggested we form our own ‘punk rock wrestling’ organization, and the only thing I remember saying was ‘hell yeah.’”

It’s a performance, sure, but it’s a damn good performance, and there’s real emotion out there. It’s a beautiful thing to watch.

Launched in 2014, Freelance Wrestling hosts adult-only wrestling shows all across Chicago, from the grungy Bottom Lounge to the snazzy Logan Square Auditorium. Each night includes matches between various heroes and villains—known as “faces” and “heels” in the wrestling world—and as the de facto creative director, Edinger helps develop each character and plotline.

“Our most polarizing character is Stevie Fierce, another young hungry talent fighting to make a name for himself,” says Edinger. “He’s beautiful, he’s in great shape, and boy does he know it. On one side, girls in the audience love him. But on the other side, guys hate him.”

Known for bringing a small beauty mirror in the ring, Stevie Fierce will admire himself throughout the match. But just as the referee looks away, he’ll whip around and smash the mirror across his opponent’s head.

“It’s a performance, sure,” Edinger says. “But it’s a damn good performance, and there’s real emotion out there. It’s a beautiful thing to watch.” 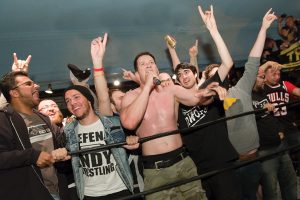