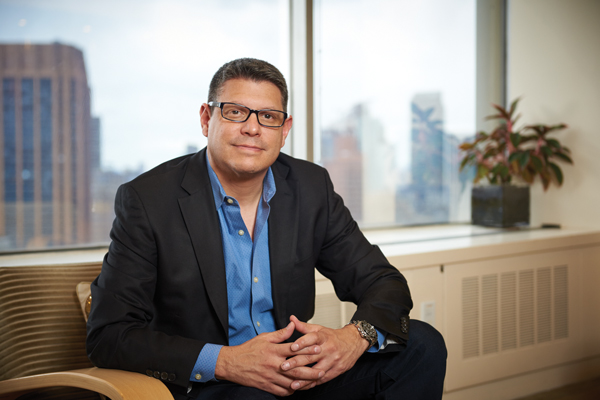 With more than two decades at Univision under his belt, de la Parra now works in their New York City office.

“A GOOD MARKETING CAMPAIGN can really propel a good series or film or story or company,” says Luis de la Parra ’95. Today, de la Parra works as senior vice president of partner solutions at Univision, Inc., a leading American Spanish-language media company. He partners with agencies and brands like T-Mobile, Toyota, and Walmart to develop marketing strategies to connect his clients with Univision’s massive audience: 108 million people monthly through various assets. Since starting as a Univision intern 20 years ago, de la Parra has climbed the company ladder—and it all started in Chicago.

De la Parra was a Communications student at University of New Haven in Connecticut when a professor told him about Columbia College Chicago’s media industry focus. So he flew to Chicago to check things out—and landed in the middle of a Halloween weekend blizzard. Columbia’s industry connections impressed him, though: In spite of the blizzard, he transferred the next semester to study Film and Video Producing.

While taking classes and working on student films, de la Parra felt drawn to the marketing side of the media world. “Columbia has really good courses on how to option your stories, how to merchandise them, and how to market them,” he says. “Once you start learning about the industry, you’re learning about yourself and what you’re good at.”

Right after graduation in 1995, de la Parra began an internship at Univison. The company had just purchased a Chicago television station, WGBO, to transform into a Spanish-language station. De la Parra helped build a plan for the station’s shift that earned him a full-time job as a pro­motional producer. Shortly afterwards, he developed a production strategy for a local newscast—including building a Chicago studio and hiring a team. Though he was new to the company, he approached the general manager with his pitch—and not only did Univision go for the plan, but they elevated him to a production manager after just six months at the company.

Over the next 15 years, de la Parra moved around the country replicating his successful Chicago strategies at stations in New York City, Miami, Dallas, Houston, and LA (Univision’s top Hispanic market). As marketing evolved alongside the internet, he stayed at the forefront “on a network level, local level, social media level, and digital level.” Five years ago, he moved to his current role in New York City. “That’s one of the reasons I stayed with this organization: I was asked to do different things that kept me fresh and relevant,” he says.

Today, de la Parra works with brands to connect them with Univision’s television programs and digital and social media platforms—often in innovative and unexpected ways. A recent T-Mobile partnership harnessed the power of social media and digital platforms with a takeover of Univision awards show Permio lo Nuestro that included a surprise concert from singer J Balvin. Fans were able to skip an entire commercial break by watching the concert through social media or T-Mobile sites.

“To engage in true marketing campaigns nowadays, you can’t just do 30-second spots,” he says. “Experiential marketing travels back and forth between social media, digital, and linear capabilities.”

As far as his ongoing ties to Columbia, de la Parra is a triple threat: an alum, donor, and member of the Board of Trustees. While some Columbia students already intern with Univision’s local Chicago affiliate, he hopes to establish more partnership opportunities between the institutions. “Internships are key for this particular industry to succeed—and this particular college to succeed,” he says.

In January, de la Parra organized Creating Branded Content That Sells, a marketing event at Univision’s New York City office—perfectly timed for a visiting J-term advertising class to attend. Marketers from companies like NBCUniversal and Verizon offered expert insight about branding, storytelling, and connecting with consumers to the audience of students and alumni.

De la Parra remains impressed and inspired by Columbia’s students. “There’s a lot to learn from younger people and their creative vision,” he says. “Columbia is still very relevant in my professional career and life.”