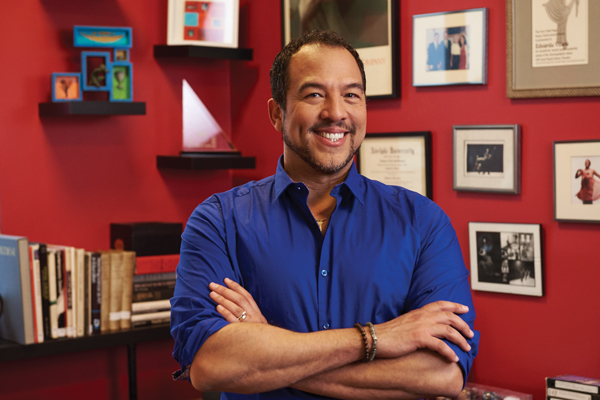 “The art [of Ballet Hispanico] has always been about the diverse, beautiful continued traditions of the Latino cultures. There’s nothing like the joy of a Latino salsa or mariachi, but we take those forms, deconstruct them, and reconstruct them into a dance that shows the essences of the culture without it being a caricature,” said Vilaro, artistic director and CEO of New York City’s Ballet Hispanico.

Much as he seamlessly weaves together varied dance forms in his choreography, Vilaro has crafted a unique and meaningful career out of dance, nonprofit leadership, advocacy, and education.

Vilaro, who was born in Havana, Cuba and grew up in the Bronx, fell in love with dance when he was cast in a middle school production of You’re a Good Man, Charlie Brown. Worried a career in dance might disappoint his parents, he hid his dance from them by registering for martial arts classes and then sneaking over to the ballet studio next door.

“I prepped bit by bit until I left school and I had to tell my parents that my passion is dance,” said Vilaro, who was accepted into summer programs with the prestigious modern dance programs at the historically black Alvin Ailey American Dance School and the pioneering Martha Graham School of Contemporary Dance.

In 1986, while he was finishing his studies at Adelphi University, Vilaro auditioned for Ballet Hispanico founder and then-artistic director Tina Ramirez, and she welcomed him into the company. During his nine years there, Vilaro rose through the ranks to become a principal dancer, but also grew as a leader, educator, and spokesperson.

We take those forms … and reconstruct them into a dance that shows the essences of the culture without it being a caricature.

Connecting with Ballet Hispanico’s mission through his outreach work en­ergized Vilaro and helped him realize he wanted to go back to school. He enrolled in Columbia College Chicago’s master’s degree program in Interdisciplinary Arts. “I wanted to use some of those ideas [in] developing dance programs for everyone,” he said.

Once he graduated from Columbia, Vilaro brought his vision to life in Luna Negra Dance Theater, which he founded in 1999 to work in and with Chicago’s large Latino community. Under his guidance, the orga­nization flourished not only civically, but artistically. It moved into Millennium Park’s coveted Harris Theater space, taught dance in the city’s neighborhoods, and toured both nationally and internationally.

Ten years later, in 2009, Vilaro received a phone call from Ramirez of Ballet Hispanico, who insisted he was the only person who could run the organization when she retired. Even though it meant leaving Luna Negra, Vilaro leapt at the chance to lead the orga­nization that formed his artistic identity.

“Ballet Hispanico has put me in a larger playing field for the impact that I can bring to my community and my art form, working in a well-respected, 46-year-old, Latino-led, -founded, -run organization,” said Vilaro.

Under Vilaro, Ballet Hispanico demon­strates his commitment to engaging the au­dience in important conversations. “We talk about the needs of diversity, racial equity, equality—and do it through the platform of dance, both the art that’s on the stage and what we do out in the community.”

Whether he’s connecting young Latino dancers to their cultural heritage in Ballet Hispanico’s 750-student dance school, leading salsa classes for migrant workers in Santa Barbara, California, or bringing dancers into a juvenile detention facility to perform for and teach incarcerated young men, Vilaro continues to forge his own path radiating from the intersection of art and social justice. “For me, activist art is taking the art to the places that need it,” he says.