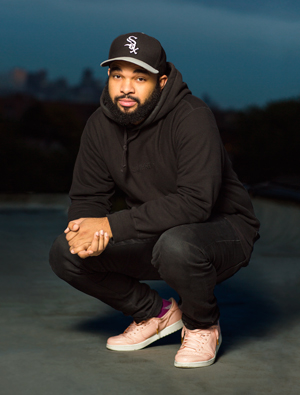 As a teenager growing up in suburban New Jersey, producer Malcolm “King Thelonious” Martin watched a lot of late night television. In fact, a J. Dilla bump he heard on Adult Swim made him want to create music. “It was just this moment—I heard something super soulful, and I was overcome with this feeling of happiness,” Martin recalls. “I realized that I wanted to recreate that for other people. I wanted to be a part of that, not just be a listener.”

At 24 years old, the former Columbia student has collected an impressive roster of achievements. He’s collaborated with Chance the Rapper. He’s produced songs for Vic Mensa, A$AP Rocky, Mac Miller and others. And in 2014, he released his first full-length album, Wünderkid, while still enrolled at Columbia College Chicago.

After his late-night run-in with J. Dilla, Martin’s approach to music shifted; he began to pursue it studiously. Martin begged his mother for a laptop and began spending “countless hours” making beats and watching YouTube tutorials to teach himself to construct his own tracks. “I feel like I put myself through my own version of music school,” he says.

Martin grew up surrounded by music. In addition to the gospel he heard in church and his parents’ well-rounded collection of blues, soul and jazz records, his mother turned him onto OutKast, N.E.R.D., Jadakiss and N.O.R.E. In high school, a handful of teachers introduced him to production software that allowed him to experiment with manipulating sound.

Martin began considering college as an opportunity to refine his skills. “I knew the scene in Chicago, especially the people in my age group, were about to be on to something,” he says. “I wanted to be a part of it.” He moved to Chicago and enrolled at Columbia, where he learned how to be more open as an artist and to network with his peers.

“I heard something super soulful, and I was overcome with this feeling of happiness.” 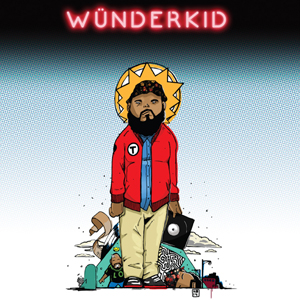 In 2014, Martin released his first full-length album, Wünderkid, while enrolled at Columbia.

Outside of his classes, Martin found exactly what he was looking for in the city’s rap and hip-hop community. He joined SAVEMONEY—a rap collective that counts Chance the Rapper and Vic Mensa among its members—and released Wünderkid when he was just 21 years old.

The 15 tracks on Wünderkid showcase a surprising range for a debut album. The tracks alternate between R&B, pop and rap interludes. “Corners of Your Mind” and “Tree of Life Reprise” are sensual, featuring smooth female vocals between punctuations of piano, guitar and synthesizer. Martin’s instinct for rhythm is strongest in “Purp Interlude” and “Malcolm Interlude,” featuring Joey Purp and Mac Miller, respectively.

The same year Wünderkid was released, Martin’s career came full circle when his song “September” was featured on Adult Swim. Late-night television continues to inspire him. In October, Martin released a beat tape called Late Night Programming, which he says explores what it was like “being a kid raised by television.” He is also working on a full-length album that will further explore the concept, currently titled As Seen on TV.