Sarah Schlieder ’16 discovered a cave on Mars as part of a Columbia astrobiology class. Now, she works full time at NASA. 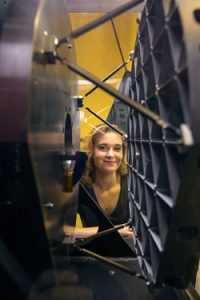 In 2014, Sarah Schlieder ’16 made an amazing discovery in a Columbia College Chicago astrobiology class: She found a cave on Mars.

Schlieder and her classmates used a program called JMARS, a digital mapping interface that allowed them to explore the Red Planet from the safety of a computer screen.

“Caves on Mars would appear as round or semi-round black circles. If there was any light reflecting, it would probably have been a crater,” says Schlieder. “When we realized we had potentially found a cave on Mars, the class was ecstatic.”

“The size of the cave she found compared to the surface of Mars is like a needle in a haystack,” says James Sweitzer, the part-time Science and Mathematics faculty member leading the class. “Sarah put in a lot of extra care and extra thinking.”

Because caves offer potential spaces for astronauts to live and work while avoiding the planet’s dust storms and radiation from the sun, Sweitzer scheduled a teleconference with NASA scientist Philip Christensen, who oversees NASA’s Mars missions. 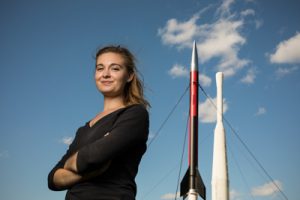 Schlieder poses in front of a 1960 Delta rocket outside of the Goddard Space Flight Center, where she works full time for NASA.

The data got NASA’s attention; Schlieder and her classmates presented their findings to scientists at the Jet Propulsion Laboratory in Pasadena, California. When Schlieder introduced herself, her Science Journalism major stuck out. “[After the presentation,] they said there were some great opportunities at NASA for me,” she says.

When Schlieder began looking at colleges, she was drawn to Columbia’s Science Journalism major—the only undergraduate program of its kind in the country at the time. She grew up in Sheboygan, Wisconsin, reading magazines like National Geographic and Scientific American and watching the news with her parents every night. The opportunity to combine her passions for science and writing was impossible to ignore; Columbia was the only school she applied to.

Following the cave discovery, Sweitzer encouraged Schlieder to apply to NASA’s internship program. She accepted an internship position at the Johnson Space Center in Houston, Texas, in 2014 where she oversaw digital and print communications for the Orion Spacecraft. When that opportunity ended, she was invited to take a position at NASA’s Goddard Space Flight Center in Goddard, Maryland, while she was still a student. She stepped up full time at NASA while wrapping up her final year of classes online.

“I was balancing finishing my degree while also working a full-time job, and making sure that I’m putting 100 percent into both,” she says.

“We’re sending astronauts into space. We’re building rockets and launching satellites. We’re studying both the world beneath our feet and worlds lightyears away.” 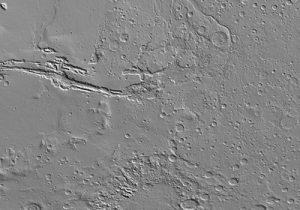 Schlieder and her Astrobiology class used the program JMARS to scan the surface of Mars through images like this.

At the Goddard Space Flight Center today, Schlieder works on the Planetary Communications Team, writing stories about planets in our own solar system. She facilitates communication support for the OSIRIS-REx asteroid mission, writing feature stories and press releases to keep the public up to date on the spacecraft’s journey to the asteroid Bennu. In 2016, she stepped up as managing editor of NASA Next, where she translates scientific research into stories for children and teens.

One of Schlieder’s favorite parts of working at NASA? When it comes to space, the potential discoveries are endless. The first issue of NASA Next launched in May 2016, with Schlieder at the helm. “You may not know it, but NASA is doing some pretty awesome things,” she wrote in her first letter from the editor. “We’re sending astronauts into space. We’re building rockets and launching satellites. We’re studying both the world beneath our feet and worlds lightyears away.”