By reconnecting to his indigenous culture, rapper and activist Frank Waln (BA ’14) found a sense of purpose. Now, he hopes to help other Native youth do the same.

Waln grew up on a ranch on the Rosebud Reservation in South Dakota, one of the largest and poorest reservations in the country. “The reservation where I’m from is the size of Rhode Island and there’s one stoplight on the whole reservation,” he says.

He excelled in high school and received the Gates Millennium Scholarship, earning him a free ride to the college of his choice. Opportunities like that are one in a million on the rez, so Waln decided to shoot for a high-earning profession, studying pre-med for two years. But he had been writing and recording rap with his cousins since he was 15 and knew he wanted to make music one way or another, so after taking a break from school, he finally decided to follow his passion by entering Columbia College Chicago’s Audio Arts & Acoustics program.

“I always knew I wanted to help my people; I just didn’t realize I could do it through what I love,” Waln says. “It took me a couple years to figure that out.”

Waln says Columbia shaped him as an activist. A Culture, Race and Media class taught him to deconstruct popular media and learn why, for example, a girl he met on the elevator thought Native Americans were extinct. And the professor of that class, Claudette Roper, put herself on the line to get Waln on stage while he was still in school: She refused to speak at an international conference in New York unless he was allowed to perform there.

“Whenever I went back to our culture, I knew why I was alive. It tells you who you are.”

With every performance, Waln shows his culture is anything but dead. He raps about his contemporary struggles, like growing up on a rural reservation where the unemployment rate sometimes hits 80 percent, in an ethnic community with the highest rates of substance abuse, sexual assault and suicide. He also mixes Native music into his sound and features indigenous dancers sporting handmade regalia in his music videos and live performances.

“I think it’s a good example of how our culture is alive and living and breathing,” Waln says. “There are pieces of the past, yet it’s also very new.” 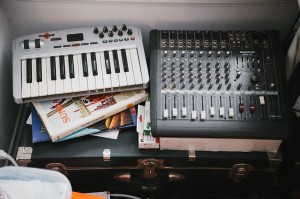 Frank Waln writes and records a majority of his music in his Rogers Park apartment, which doubles as his studio.

Though Waln is only 25, he’s already performed with the greats: In September, he shared a stage with Neil Young and Willie Nelson at a benefit concert protesting the Keystone XL Pipeline. “Everyone was there to see Willie and Neil, I knew that … [but] afterwards I had a lot of people tell me that my set was their favorite, which was incredible,” he says. “And these were old white people, you know.”

Mostly, Waln makes a living performing for smaller, younger crowds, usually at colleges or grade schools for indigenous youth. He tells them how, when things seemed most bleak, his culture pulled him back to life.

“When you’re growing up in one of the poorest places in the world … and your peers are dying, your family’s dying, you’re hopeless,” he says. “You’re like, ‘Why am I alive?’ And whenever I went back to our culture, I knew why I was alive. It tells you who you are.”

Today, Waln is working on an album about his life story. Through his passionate and honest music, he hopes to empower Natives and educate others.

“My generation needs to be born back into what we’re supposed to be—who we are, our blood, our DNA,” he says.

What to know About the Keystone XL Pipeline

Frank Waln appeared on an episode of MTV’s Rebel Music to speak about the environmental implications of the Keystone XL Pipeline, a proposed route to bring oil from Canada’s tar sands to refineries in the U.S. There are three major factors behind indigenous resistance:

—America’s 566 federally recognized tribes operate as sovereign nations inside the U.S., and Waln says they legally have a right to determine what happens on their land. However, the pipeline would run through the Rosebud Reservation despite the Sioux tribe’s opposition. “Hasn’t the government done enough to us?” Waln says.

—In the best of times, one in three indigenous women is a victim of sexual assault. The pipeline construction could bring up to 600 out-of-town men to a small Native community, which indigenous leaders worry will make the local women easy targets for sexual violence.

—The pipeline would run through the Ogallala Aquifer, which provides drinking water to eight states. Residents of the reservations, as well as farmers and ranchers, are concerned about pollution of their water. “Indigenous cultures have taken care of the land before the U.S. was a country, before these corporations existed,” Waln says. “It’s cool that indigenous voices are leading [the fight].”