Chicago artist Don’t Fret says 97 percent of his art no longer exists. And he’s just fine with that.

He began using the moniker Don’t Fret as a teenager, long before the Chicago Reader called him the “Street Artist of the Year.” Even before the paper praised his “established work.” Before he slid quietly through Columbia College Chicago on his way to a bachelor’s degree in photography. Before his pilgrimage to Brazil to learn the process of wheat pasting. And before he’d ever been arrested for destruction of property. After trying his hand rather unsuccessfully at graffiti, he started covering walls with the words and images that needed an outlet. 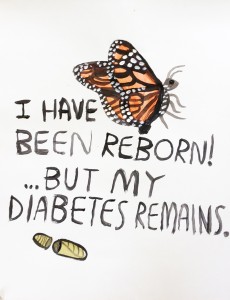 This poster, “I have been reborn! … but my diabetes remains,” hints at the artist’s sly sense of humor. The piece showed at a 2013 event at Chicago rock club Empty Bottle. 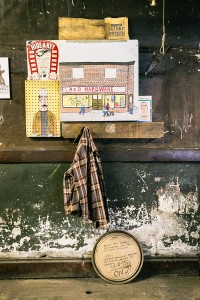 As part of his pop-up show There Are Two Seasons in Chicago: Winter and Construction, Don’t Fret renovated the inside of a closing Fulton Market hardware store. 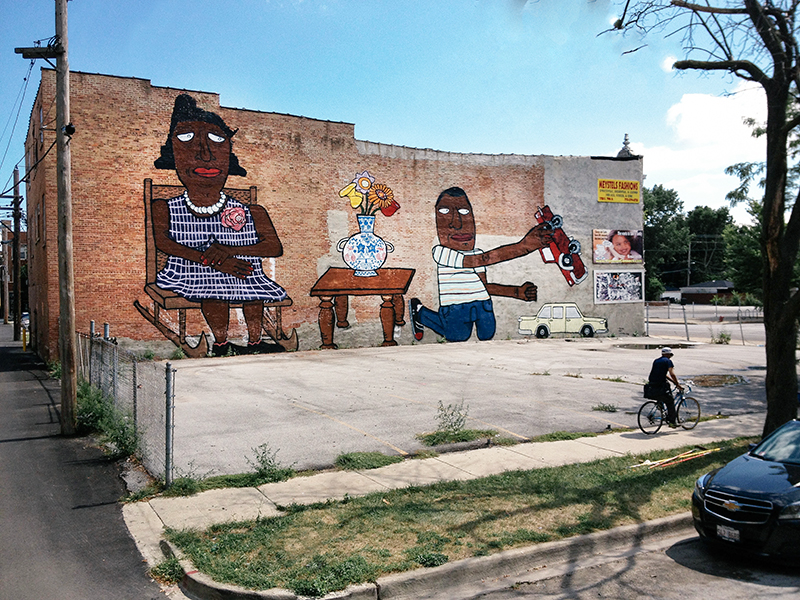 Don’t Fret estimates that a majority of his street art has disappeared, but you can still spot this mural at 79th and Stony Island in Chicago’s South Shore neighborhood.

He has no idea just how many renderings he’s plastered around the city. “But I can say with absolute certainty that 97 percent of everything I’ve done doesn’t exist anymore,” says Fret of a temporary art scene in which he’s made a name for himself—sort of. “There’s something to be said for just putting your work out there anonymously and having it really be about your work. It’s not about me.”

Rather, the art is all about his birthplace: The City of Big Shoulders trumped by big business. Fret’s larger-than-life characters resembling the Polish, German and Eastern European faces of his Wicker Park youth turn up under the cover of night beneath signs for Old Style bars and in bricked alleys near slaughter houses where true hog butchers used to spill and clean up blood— even within a stone’s throw of various gentrified spots inside the Loop.

Fret’s own blue-collar roots are reflected in equal parts homage and good humor with workaday Dombrowski types and immigrant hot dog vendors. Sometimes he leaves a finger-wagging witticism for the passersby. Maybe a tongue twister with a touch of social commentary: “Sally sells crack cocaine by the seashore.” Today, Don’t Fret’s work stretches past Chicago’s streets. This buildingwide mural appears at the intersection of 27th and Larimer Street in Denver, Colo.

“My first love will always be putting work on the street and having that direct interaction with the public,” Fret says. “But I also love doing work inside spaces in galleries, and more recently, taking over abandoned spaces and throwing a kind of temporary experience.”

In August 2014, Fret created a farewell installation in a 75-year-old Fulton Market hardware store scheduled for demolition. There Are Two Seasons in Chicago: Winter and Construction showcased his gigantic characters on the city-block building and used the store’s nut-and-bolt leftovers, including keys and old advertisements, to give visitors a sense of West Side nostalgia.

Even with the critical acclaim, Fret feels better being a bit of a ghost in his own scene, cruising through shows, still somewhat “panicked” with opening-night jitters, unknown to the gathering crowd. An anonymous artist outliving nearly all of his art.

About as comfortable with the label of “street artist” as he is sharing his baptismal name, Fret prefers to be called an “interdisciplinary artist.” So he remains living in the moment, away from the spotlight, creating something short-lived for a citywide canvas. —William Meiners (MFA ’96)