On the silver screen, a director’s handiwork can’t be missed, but “editing is invisible,” says Peter Teschner (’80), whose 40-plus film credits include The Brady Bunch Movie (1995), Charlie’s Angels (2000), Borat (2006) and Horrible Bosses (2012). As a film editor, Teschner moves the story forward and provides seamless transitions from scene to scene.

For this Hollywood veteran, who developed his editing talents at Columbia College and cut his teeth in Chicago’s commercial industry, a dedication to the craft has made all the difference. He left school after two years to work for Editor’s Choice, a film editing company specializing in TV commercials, where the young man from the western suburbs immediately surprised his employers by knowing his way around a synchronizer.

Along the way, Teschner’s cousin introduced him to her best friend, Gloria. In 1984, the couple packed up a Toyota Tercel and moved to Hollywood. They married in 1986.

Almost a decade of editing horror flicks led to a near-existential crisis for Peter. “I remember talking to Gloria, saying, ‘We may have to move back [to Chicago]. I’m not sure I can keep working on these really horrible movies.’”

But the tide turned—to comedy. Teschner fell into collaborations with some like-minded people, including Betty Thomas, who directed Private Parts, a biographical comedy about radio mogul Howard Stern, in 1997. He considers his work on St. Vincent (2014), the Bill Murray comedy directed by Theodore Melfi, as perhaps the most gratifying of his career.

In a hard-charging business, Teschner believes there’s something to be said for that old Midwestern work ethic. He’s hired a number of Columbia College interns and believes in paying back the school that honored him with an Alumnus of the Year award in 2006. The Peter and Gloria Teschner Scholarship provides funds to help defray tuition expenses to one Cinema Art + Science student per year.

Philanthropy is very personal for both Teschners. For Peter, it’s a chance to thank Columbia for being “such a practical, hands-on place.” Gloria found her cause close to their California home. As the immediate past president of the Downtown Women’s Center (DWC), which addresses the particular needs of homeless women (an estimated 13,300 in Los Angeles County), she helped lead the efforts of a $35 million capital campaign.

“We have the solution to homelessness,” says Gloria of the DWC, which has become a national model. “It’s permanent supportive housing. There are 119 units and women can stay as long as they like. We serve three meals a day: breakfast, lunch and a hearty snack. We have a learning center with computers and workshops. And we launched the first medical and mental health clinic for uninsured or underinsured women on Skid Row.”

Whether they’re helping California women through difficult times or keeping the dreams of Columbia students alive, the good deeds of Peter and Gloria Teschner have not gone unnoticed. —William Meiners (MFA ’96) 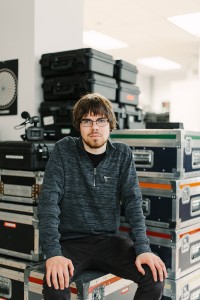 Cinema Art + Science student Matthew Sadowski (’15) is the first recipient of the Peter and Gloria Teschner Scholarship, awarded to one film student annually to defray the cost of tuition.

An aspiring filmmaker from Racine, Wis., Sadowski says he’s honored to receive the scholarship. He was diagnosed with Asperger’s syndrome around the age of 11 and had trouble socially, but he says watching thought-provoking movies, like those of director Stanley Kubrick, gave him more insight into the minds of others.

“I want to tell stories so that I can understand other people and myself,” he says. The movies he directs at Columbia, whether depicting everyday scenes or fits of fantasy, tend to deal in one way or another with feelings of rejection or lack of human connection.

Though the Teschner scholarship will contribute financially to Sadowski’s goal of making movies, the student says it’s much more than a check.

“I never knew if [what I was making] was worth anything,” Sadowski says. “For me to get a scholarship, no matter what it is, how much it is, it’s a huge honor.” —Hannah Lorenz (’16)