Impossibly gorgeous models lounge, pose and twirl on a rosy, early-morning beach in a video ad for the 2015 swim line of Victoria’s Secret. But this video isn’t just for looks. As you tap on one model’s zebra-printed bikini, a number 1 pops up, then quickly disappears. Tapping on a flowing white halter top elicits a number 2. When the video ends, those items appear in a gallery of links that lead to the Victoria’s Secret website, where you can immediately buy the products.

These touchable, easily shoppable videos are only available through Cinematique, a video platform created by Film + Video graduate Kyle Heller (BA ’08), along with his business partner Randy Ross. The format is designed to work online and as a mobile app, and Cinematique has Wired and The Wall Street Journal singing its praises as the future of video advertising. In February, Fast Company named Cinematique one of the World’s Top 10 Most Innovative Companies of 2015 in Video.

After graduating and working an unfulfilling job at an agency, Heller co-founded the production company Varient in 2010 with creative director Gina Resnick, who develops the company’s award-winning feature films, including Medeas and Brightest Star. As managing director, Heller focuses more on the business side of Varient, and dedicates most of his time to the subcompany he founded, Cinematique. 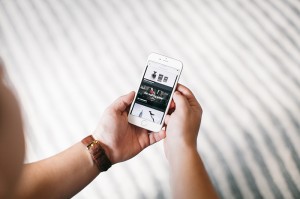 Kyle Heller founded the innovative shopping app Cinematique, praised by Wired and The Wall Street Journal as the future of video advertising. Fast Company named Cinematique one of the World’s Top 10 Most Innovative Companies of 2015 in Video.

“It’s basically a win-win-win,” Heller says of the innovative Cinematique app. “The viewer doesn’t have to leave the video to get the information that they want. The advertiser wins because they’re getting a highly targeted level of engagement based on the interest of the user … and the content provider wins because they’re actually keeping users on their content.”

Heller and Ross hatched the idea while shooting a commercial for Tom Ford. Even though Cinematique has only been around for two years, other fashion brands are already flocking to it. Heller has produced videos for clients including Stella McCartney, Jimmy Choo, Gap and Kate Spade New York, and the company now boasts locations in Los Angeles, New York City, Hong Kong and Shanghai.

Heller credits his success to making mistakes, especially at Columbia. He says the hands-on classes allowed him to make important, small-scale failures that he learned not to repeat in Hollywood.

“[At Columbia,] you’re really provoked to do, rather than learn theory and learn how it’s supposed to work,” Heller says. “You’re really pushed out there to shoot and make films.”

The innovative Cinematique app allows viewers to shop as they watch by tapping products that pique their interest.

During his college years, Heller spent a summer as a production assistant on the set of The Dark Knight (“We worked all night from 6 p.m. to 6 a.m., because the Batman comes out at night”), and took two film practicum classes, in which student teams create films in a realistic studio setting.

“[The practicum course is] definitely the best experience, I feel, that one can get in preparation for entering the film industry,” he says.

Heller certainly was prepared for that industry —in fact, he’s redefining parts of it. But any startup company, no matter how revolutionary, comes with a degree of uncertainty.

“You’re developing something completely new, and that is exciting and extremely terrifying at the same time,” Heller says. “It’s like making a movie. You have your script, but the end movie never turns out the same as the script.” —Hannah Lorenz (’16)