When Dean Johnson (MA ’01) set out to co-found Crossroads Academy, a tuition-free charter school for students K-8 in Kansas City, Mo., he knew he needed the perfect location. “Where can we be where the neighborhood around us can serve as an extended campus for the school?” he asked. “We ended up right in the heart of downtown Kansas City.”

Opened in 2012, Crossroads fit flawlessly into an urban community revitalized by arts and culture. Today, Crossroads students spend recess at a nearby city park, check out books from the public library two blocks away, and perform concerts and holiday plays at downtown theatres. “We’ve taken what could have been a weakness of the school, and we’ve really turned it into a strength,” says Johnson.

Johnson’s history in education and outreach has led him, step by step, to embrace a dynamic blend of classroom and community. After graduating in 1993 from Loyola University, where he studied English and political science, Johnson joined the Jesuit International Volunteers to teach high school in Micronesia. He originally saw volunteer teaching as a way to travel the world, but after two years overseas he fell in love with the classroom. When he returned stateside, he enrolled in Columbia College Chicago’s multicultural education graduate program.

We’ve taken what could have been a weakness of the school, and we’ve really turned it into a strength.

At Columbia, he began appreciating education’s wide scope—in Chicago and beyond. “Our professors got us to be engaged in the city around us, for sure, but especially the world,” he says. Johnson recalls a Columbia-sponsored trip to Central America as particularly meaningful. Traveling through Guatemala and El Salvador, the class met with politicians, social activists and people devastated by civil wars.

After graduating, he began working in Chicago schools, ultimately becoming the principal of San Miguel School on the South Side. His mind set on returning overseas, Johnson attended graduate school for International Political Economy and Development (IPED) at Fordham University in New York, afterward working on humanitarian efforts in Zimbabwe and Indonesia. When he and his wife were expecting their first daughter, they moved to Johnson’s hometown of Kansas City. In 2009, he began working as director for Gordon Parks Elementary School, where he met Principal Tysie McDowell-Ray. The two began building a “common philosophy for what a perfect school should be”—a place rooted in creative classrooms, community ties and outstanding teachers. Those conversations would become the basis for Crossroads Academy. 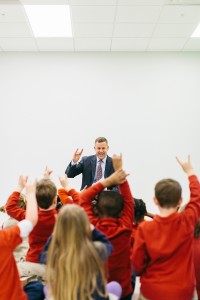 Johnson and students at Crossroads Academy gesture with the “Quiet Coyote,” a sign that everyone should focus on the speaker.

To launch the school, Johnson spearheaded fundraising efforts, earning $817,000 from public and private grants and donations with support from the Downtown Council of Kansas City. Crossroads complements the larger revitalization of Kansas City, and downtown residents embraced the school with open arms.

“It’s a great revival of people living downtown, and arts and cultural institutions are blossoming,” says Johnson. “We hear all the time how wonderful it is to have the kids downtown.”

Parents are eager to enroll their children. Today, Crossroads has a long waiting list, but Johnson sees that as a reason to continue growing. The school is in the midst of an $8 million capital campaign that will allow the school to expand both facilities and enrollment. In July 2014, Crossroads purchased two buildings (including the one it had been leasing since the start). With this permanent campus, Crossroads will expand to 422 students—more than doubling the size of its original student body.

Johnson credits Columbia with forming his worldview and shaping the Crossroads approach. “What I really appreciated about the program at Columbia was how it forced us to see the world differently,” Johnson says. “That’s important as an educator, because that’s really what we’re doing—we’re trying to challenge our students to see the complexities of the world.” —Megan Kirby