“Zombies are why WeDeliver exists,” says Jimmy Odom (’12), founder and CEO of the innovative Chicago delivery service. This origin story began in 2012, when Odom’s mom asked him to run to the pharmacy during a particularly climactic episode of The Walking Dead.

In its short life, WeDeliver has garnered quite a resumé. In 2012, the company won StartUp Weekend Chicago, a competition focused on launching new businesses. In 2014, WeDeliver was accepted into the highly competitive TechStars, a business accelerator offering startups mentorship and $118,000 in seed funding in exchange for 7 percent to 10 percent company equity. 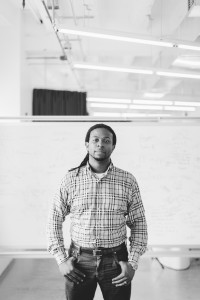 Before Odom became a start-up tycoon, he wanted to make movies. He grew up in a film-loving household with so many VHS tapes stacked in the basement that they hid the wallpaper. After his girlfriend bought a book called How to Write a Screenplay for 25 cents at Salvation Army, he wrote his first script in 60 days. But he wanted to be a better writer and storyteller—which led him to Columbia College Chicago. “You couldn’t be in Chicago and not know about Columbia’s film program,” he says.

At Columbia, Odom produced short films and music videos under tight deadlines and shoestring budgets (which came in handy when he “bootstrapped” WeDeliver’s launch). He uses skills he picked up in the film department every day at WeDeliver. After all, “A director is a CEO of a production,” he says.

As WeDeliver’s CEO, Odom constantly adjusts to inspire, encourage and direct 22 office workers and more than 350 drivers. “When I look at the team, we need me to be a different person almost all the time,” he says. “There are moments where I have to grow three times in my ability in a span of six days.”

As the company continues to grow past its one-year anniversary, Odom hopes to keep perfecting technology, building local connections and maybe even revisiting his film school days by creating marketing videos.

So could WeDeliver function in a zombie apocalypse? “Absolutely not! Our rates would be through the roof!” Odom says. But his mind is already racing: calculating fees, brainstorming about delivery specialists. “You’d have to pay in water, because water is a finite resource. This is what you have to think about,” he says—always a businessman, determined to survive.—Megan Kirby