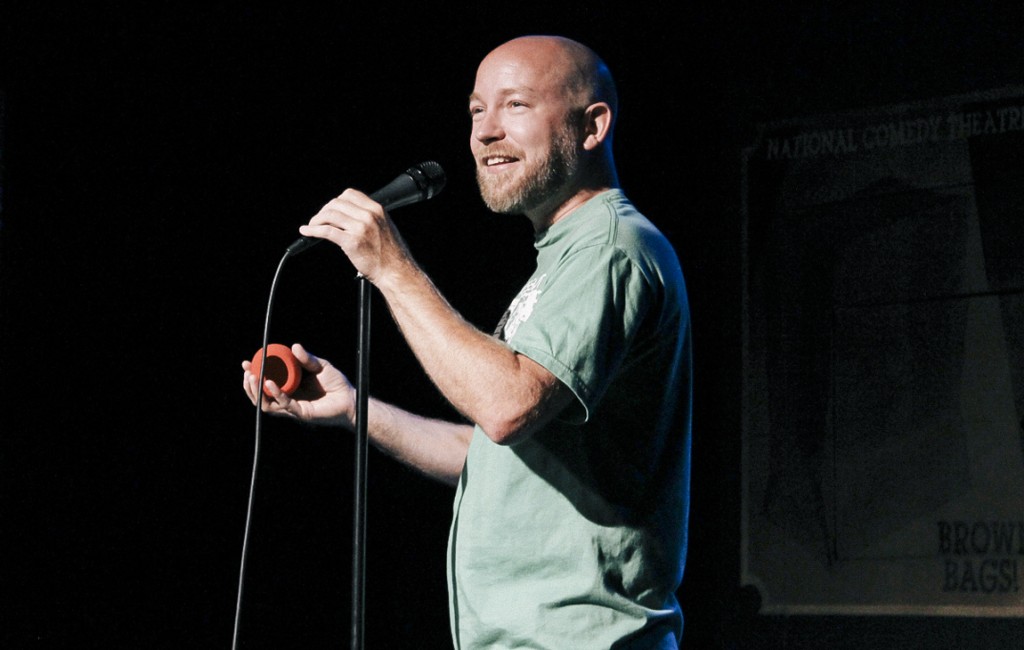 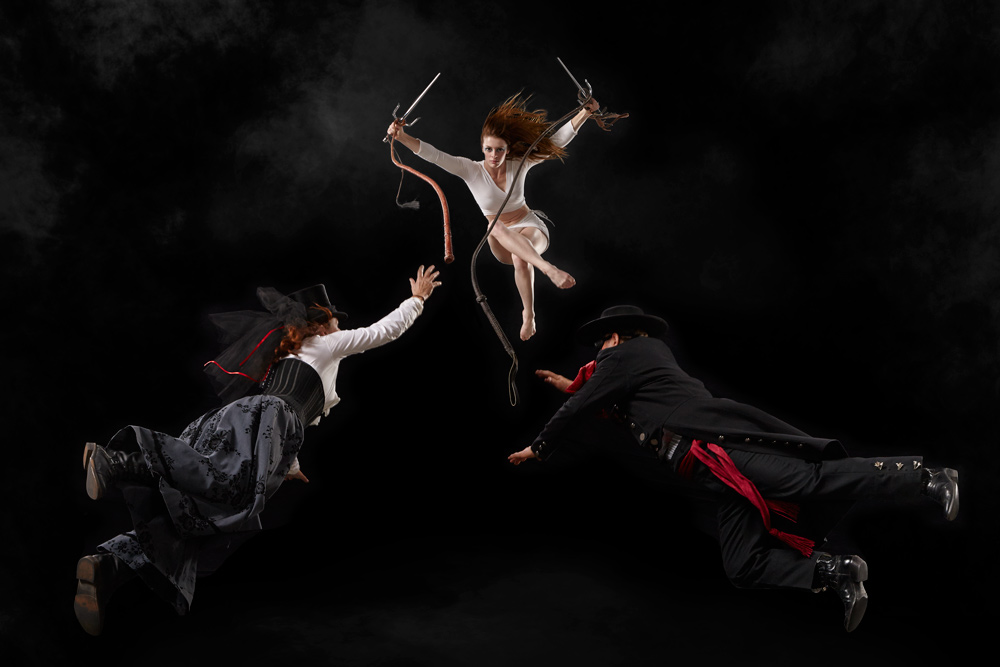 High art and comic book fans alike can find some common ground in Ethereality, a photorealistic graphic novel project by two Columbia College Chicago alums (plus a squad of performers, makeup artists and costume designers). Photographer Anthony Chiappetta (BA ’95) and stunt coordinator Andrew Amani (BA ’99) met in 2013 on a photo shoot for DEMO (“Fight Club,” Issue 19) and their artistic partnership grew from there.

Taking cues from anime, opera and comic books, Ethereality collects an extensive series of stylized photographs in a loose fantasy narrative. Instead of relying on words, the project focuses on dramatic movements and detailed character portraits. The team hopes to release the book by the end of 2014, appealing to collectors of high-art books as well as the Comic-Con crowd.

“Watching movies as a kid, I always would freeze the movie and try to expand that one scene,” says Chiappetta. “That’s what got me into photography when I was younger—looking at one moment in time and seeing what could happen in that split second. Which is what we want our audience to do [with this book]. Daydream in one single image, and have a fantasy of their own while they turn the pages.”—Megan Kirby

What are  you  doing  out  there? We want to know! To submit your news, go to colum.edu/alumni, click on “Promote Yourself,” and submit a class note. If you’ve never logged in before, you’ll need to complete a quick registration first. Class news information will be printed based on availability of space. Announcements that are incomplete or older than one year cannot be considered for publication. Deadline for the Spring/Summer 2015 issue is Feb. 1.

Steve Cushing (’74) authored the book Pioneers of the Blues Revival from the University of Illinois Press. Cushing has been on air for many years as the host of the Blues Before Sunrise radio program.

Jacquie Lewis (BA ’75) co-edited the book Weaving Dreams Into the Classroom: Practical Ideas for Teaching about Dreams and Dreaming at Every Grade Level, Including Adult Education.

Chris McKay (BA ’91) was the editor and animation co-director on The LEGO Movie, which opened on Feb. 7. The film set a box-office record as the second highest grossing movie ever to open in February. David Tuber (BA ’05) was the storyboard artist.

Andrea Miles’ (BA ’94) debut novel, Trespassers, will be published by She Writes Press in October. Haunting and hard edged, Trespassers is an unflinching exploration of what happen to an individual and a family in the aftermath of abuse.

Mary Mitchell (BA ’91) and Jen Sabella (’07) were named two of the most powerful women in Chicago journalism by media blogger Robert Feder. Mitchell is a long-time columnist for the Chicago Sun-Times, and Sabella is the senior editor of DNAinfo.com Chicago.

Kevin Miller (BA ’82) has published more than 100 crime, horror, fantasy and science fiction stories and poems. His stories have appeared in All About Eve and Barren Worlds, among others.

Steve Pink (’89) directed the film About Last Night, based on the play Sexual Perversity in Chicago by David Mamet. The film, starring Kevin Hart and Michael Ealy, opened on Valentine’s Day.

Phillip Bartell (BA ’92) edited the film Dear White People, which won the U.S. Dramatic Special Jury Award for Breakthrough Talent at the 2014 Sundance Film Festival and was recently picked up by Lionsgate.

Arnie Bernstein (MA ’94) visited the historical Sanctuary of the South Britain Congregational Church to talk about his book Swastika Nation: Fritz Kuhn and the Rise and Fall of the German-American Bund. The book is being reissued in paperback by Picador in September. Translation rights for the book have been bought by Rebis Publishing House for publication in Poland.

Mary Launi (BA ’97) was a featured artist for the month of April at the Westmont Public Library.

Michael Matthews (BA ’99) and Cynthia Sciacca (BA ’99) are collaborating in Los Angeles on a new musical, Psyche: A Modern Rock Opera. Matthews is directing and Sciacca is co-starring.

Jen White (BA ’99) was director of photography for Lady Valor: The Kristin Beck Story, which premiered at South by Southwest.

Kyle Heller’s (BA ’08) film At the Devil’s Door premiered at South by Southwest. His video app, Cinematique, was also recently featured in an article by Wired.

Theresa Guleserian (BA ’05) was the production designer on the film The One I Love, which premiered at Sundance and was bought by RADiUS-TWC. It will receive theatrical release in the fourth quarter of 2014. The romantic comedy, directed by the Duplass brothers (Jeff, Who Lives at Home), stars Mark Duplass, Elisabeth Moss and Ted Danson.

David Heinz (BA ’02) edited Adult World, starring John Cusack and Emma Roberts. He was also an editor for This Means War and a visual effects editor for Dawn of the Planet of the Apes and X-Men Origins: Wolverine.

Rachael Perrotta (BA ’02) was named “Best Anti-Establishment Mouthpiece” for her work as publicist for Occupy Chicago in the Chicago Reader’s Best of Chicago edition.

Kate Simons (’00) published observe: a journal for photographers, a blank journal for noting camera settings in the field and writing observations. The journal is available at ShopColumbia, Amazon and Barnes & Noble.

David Baker (MFA ’00) directed the feature documentary American Wine Story, which premiered to a sold-out audience at the 2014 Newport Beach Film Festival. American Wine Story follows the stories of dozens of people who left behind past lives to pursue their winemaking dreams to various degrees of success.

Elizabeth Calhoun-Girtley (MA ’07) is the owner of two businesses in Chicago: LCG Events, LLC, and Pose By LCG Photography. She is the author of Loyalty Beyond the Bars.

Robyn Coffin (BA ’02) has a role in the upcoming feature film Finding Hope. She also plays a recurring role on NBC’s Chicago Fire.

John-Michael Damato (BA ’08) was second unit director for the film Boys of Abu Ghraib, which received theatrical release in 10 cities in March. It is also available through various video-on-demand services, and will be released in the United Kingdom, Germany, Japan and Iran.

Benjamin Dehaven (BA ’00) wrote the Most Wished for Book of the Year on the website Indie-Bound: Confessions of a Self-Help Writer.

Brandon Dermer (BA ’08) wrote and directed the music video for “No One Survives” by Nekrogoblikon, which competed in the music video competition at South by Southwest. Since graduating, Dermer has written and directed narrative music videos that received praise from Vimeo, Huffington Post, BloodyDisgusting and Pitchfork.

Selena Fragassi (BA ’04) had an article anthologized in That Devil Music: Best Rock Writing 2014. Fragassi works in Chicago as a freelance music journalist, and launched her own site, Boxx Magazine (which profiles women in music), in 2012.

Lorrisa  Julianus (’03) appeared on Chicago PD. She also stars in the upcoming SAG short films Til Death Do Us Part and Marked, both crewed by several Columbia film alumni.

Jesse Klug (BFA ’05) designed the lights for Death and the Maiden, starring Sandra Oh, at Victory Gardens Theater. Klug’s upcoming assignments include Seussical at Chicago Shakespeare Theater, On the Town at Marriott Theatre in Lincolnshire, Ill., and Cats at Paramount Theatre in Aurora, Ill.

Michael Mcguirk (BA ’08) directed the short film Ship of Fools, which screened at Coachella, the St. Tropez International Film Festival and the Cannes Film Festival at The Short Film Corner.

Quinn Mines (BA ’07) started an online boutique called I Am Trendii, filled with the latest fashion and fashion accessories.

Kevin B. O’Reilly (’02) joined the College of American Pathologists in November 2013 as senior editor of its monthly magazine, CAP Today.

Eric Stolze (BA ’08) penned the screenplay for the horror film Late Phases, which premiered at South by Southwest.

Dane Story (BA ’05) is developing a pilot called Lost Detroit, and completed a successful $10,000 Kickstarter campaign to raise funds to produce a 20- to 25-minute teaser.

Jordan Vogt-Roberts (BA ’06) directed the comedy pilot You’re the Worst, which has been picked up by FX with a 10-episode order.

Lena Waithe (BA ’06), producer of the award-winning film Dear White People, was named one of Variety’s “10 Comics to Watch” and Essence Magazine’s “75 Most Powerful Black Women in Hollywood.”

Joseph Yeoman (BA ’07) launched his first company, GrandBox, which provides a monthly care package for older loved ones and seniors, connecting families all across the United States.

Justin Bostian’s (BA ’13) essay “Staying Power” was selected as an honorable mention in the March 2015 issue of Plain China.

Devon Edwards (BA ’11) was named Chicago Filmmaker of the Year by RAW, an international collective of artists. The Red Line Project recently published a story on Edwards’ life, education and aspirations.

Artist Bryan Butt (BA ’11) and curator Lisa Lindvay (MFA ’09) show off their work at the Alumni on 5 spring opening exhibition and reception in May.

Dustin Erikstrup (BA ’12) was named one of Windy City Times’ “30 Under 30,” which honors members of the LGBTQIA community. Erikstrup is a manager of special events at Center on Halsted.

Jessie Ann Foley’s (MFA ’12) novel The Carnival at Bray was awarded the Sheehan Prize for Young Adult Lit, and is being published by Elephant Rock Books in October.

Joel Everett (BM ’10) was awarded a regional Emmy for Music Composer/Arranger for the documentary Merger: Making the Twin City.

Trace Headrick (BA ’13) is working for KTXS in Abilene, Texas, as a news producer.

Sam Medina (BA ’14) is touring with the band Rebelution as a videographer. He produced, shot, directed and edited update videos on the road over the course of the two months to promote the group’s fourth studio album, Count Me In.

Sara Peck (MFA ’12) will publish a collection of poetry titled Here You Are with Horse Less Press in 2015. She also published the chapbook Yr Lad Bob with Persistant Editions in 2013.

Jason Potash (BA ’07), along with fellow alum Kyle Heller (BA ’08), produced the film Brightest Star, which hit theaters in January and is now available on iTunes. The film stars Allison Janney and Chris Lowell and is expanded from the 2009 short film Some Boys Don’t Leave.

Jason Reblando (MFA ’10) was named one of the best visual artists to see in Chicago by CBS Chicago for his exhibition “Our Work: Modern Jobs—Ancient Origins” at the University of Chicago’s Oriental Institute.

Josh Salt (BA ’14) was the understudy for Daniel Radcliffe in the Tony-nominated Broadway play The Cripple of Inishmaan, and took the stage for Radcliffe on short notice.

Marty Susmaras (BA ’10) has been promoted to full-time head photographer at L.H. Selman Ltd. in Chicago. He photographs glass paperweights sold in auctions and for online private sale.

Francesca Thompson’s (BA ’12) story “Homecoming” was selected as an honorable mention in the October issue of Plain China.

Cyn Vargas (MFA ’13) was named as one of the 25 Writers to Watch from the Guild Literary Complex. Her short-story collection will be published by Curbside Splendor Publishing in 2015.

Marlyn Gutiérrez Malavé (BA ’90; MA ’07) passed away at the age of 46 on June 8 after a two-year battle with cancer. She was a bilingual voiceover artist and media specialist.