Lee Bey (BA ’88) was sweating it out on a May day in 2001. Less than three weeks into his job as Chicago Mayor Richard M. Daley’s deputy chief of staff, Bey found himself informing a room full of prized architects and Chicago Bears owners that the boss wanted a new football stadium to be shoehorned into the historic Soldier Field structure—instead of constructing a brand-new field elsewhere. Delivering the decision “nobody was happy about” forced the longtime journalist and architecture critic to improvise some serious diplomacy skills on the spot.

“I understood the gravity of what I was getting myself into,” Bey says, “but the fact that I could find the levers and ask the right questions to get this done—it was Columbia that taught me that.”

Born in 1965 to working-class parents on the South Side, Bey fell in love with the city at an early age. His parents took him “everywhere,” instilling in him an appreciation of Chicago’s diverse neighborhoods and architecture. During the Sears Tower’s construction in the early 1970s, the young Bey begged his father to drive him into the Loop regularly as the soon-to-be world’s tallest building climbed higher and higher into the sky.

A self-proclaimed “extraordinarily lazy” student, Bey got a wakeup call at age 15 when his 52-year-old father died suddenly. He went to vocational school to become a printing press operator. But when computer-operated presses came along, Bey took the advice of his English teacher and pursued journalism, writing for local newspapers and eventually enrolling in Columbia’s journalism program in 1985.

“It was an interesting time because Harold Washington was mayor, and there was this interest in African Americans being represented and [having] voices in the media,” Bey says. “I said, ‘This is where I want to be.’” 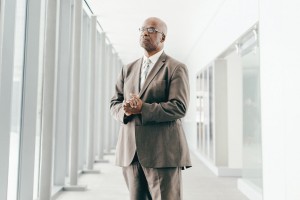 Lee Bey takes care of business at University of Chicago’s Logan Center of the Arts.

Upon graduation in 1988, Bey went to work for the City News Bureau, the notoriously rigorous training ground for cub reporters to cover every tiny, grisly detail of the city’s crimes, courts and political machines. From there, he moved to the Daily Southtown and then the Chicago Sun-Times in 1992, where he covered crime, gangs and government scandals—including the explosive story he and Maureen O’Donnell broke about U.S. Rep. Mel Reynolds engaging in a sexual relationship with a teenaged campaign volunteer, which turned into a yearlong exposé that ultimately led to the politician’s prison sentence.

Burnt out after covering “every story of murder, scam and rape” for three years, Bey jumped at the chance to become the Sun-Times’ first architecture critic. The new editor selected him even though he’d written only one architecturally-themed piece, much to the shock of the other reporters—and Bey himself.

But Bey found his niche, using his weekly full-page column not only to critique new architecture, but to fight for the preservation of significant city landmarks, including those in Bronzeville, one of the nation’s most important centers of African-American urban history—and where Bey’s father had grown up.

“The city was moving to demolish [about eight] historic buildings that were the anchors of Bronzeville,” Bey says, so the paper campaigned to save them. “The city landmarked some, [and] they specifically saved the old Eighth Regiment Armory [the first U.S. armory built for an African-American military regiment] and turned it into a high school, on the strength of what we had written.”

Mayor Daley had taken notice of Bey’s work and handpicked him in spring 2001 to become his senior architectural design adviser. In addition to managing the 18-month Soldier Field project, during his time at City Hall, Bey worked to bring the Joffrey Ballet Co. headquarters to downtown, hammered out a deal that saved the historic Metropolitan Baptist Church from demolition and negotiated the creation of a green roof—one of America’s largest—atop the $700 million expansion of Chicago’s McCormick Place Convention Center.

But after three years of rapid-fire project oversight, he needed a change. “Working at that level in the mayor’s office is like riding a bronco: You can do it, but you can’t do it forever, and you don’t want to get thrown,” he says.

In 2004, Bey moved to the architectural firm Skidmore, Owings and Merrill—designers of his beloved Sears Tower—to serve as the company’s governmental liaison. He then became executive director of the influential civic group Chicago Central Area Committee, all the while pursuing other creative outlets: He hosted and produced programs on WBEZ, launched an architectural photography business and consulted with architectural firms.

Today, Bey is civic engagement and special projects manager at the Arts Incubator with The University of Chicago Arts and Public Life Initiative, where he manages strategic initiatives and partnerships with arts organizations, community groups and civic leaders.

This Renaissance man says he often marvels at the unexpected twists his career has taken, but he says his time at Columbia instilled in him the willingness to try. “Education is not learning a skill, necessarily; it’s opening the doors of your mind so that everything can be considered,” he says. “And that’s what Columbia did for me. To be able to take the strange turns that my career has taken—it takes a mind that’s open.” — Kristi Turnbaugh

History from the ground up

Standing next to Navy Pier, the Lake Point Tower apartment building doesn’t loom over its neighbors, but its uniquely curved design stands out. Bey says the building, which has been home to stars such as Sammy Sosa, Halle Berry and Tom Cruise, is “a beautiful, elegant tower, [which] to this day looks as good as it did in the ‘60s.”

Built in the 1950s—early for modern architecture—320 W. Oakdale is a concrete and glass apartment building with a “hang glider of a roof” that Bey considers a hidden gem. “It reveals itself in the Chicago way where you could drive down Oakdale and not notice it,” he says. But when you do see it, Bey says it’s well worth admiring. “If we landmark more post-war buildings in this city, that building would be worthy of landmark status.”

The Plymouth Court dormitory, located on Printer’s Row, was Columbia College Chicago’s first dorm building. Bey says the historic residence, which was originally built for the R.R. Donnelley Publishing Co. in the 19th century and bought by Columbia in 1993, fits the college’s identity in a way that’s almost uncanny. “There are few schools… that get those identity and design issues as correct as Columbia does,” Bey says.

The Media Production Center was Columbia’s first new-construction building, and Bey says it perfectly captures the college’s attitude. “[Columbia] really is a modern school, in a sense, and it’s in these classical buildings,” he says. Bey also appreciates that Columbia built something modern rather than copying the style of its older buildings. “[The Media Production Center] answers a question: What would this school build if it did build a new building?”
—Hannah Lorenz