<![endif]--> Favorite gifs/jpgs from Exaptation and the Digital Now | Columbia at CAA

The panel presentation conference format can be a little dry, even when the subject is super fascinating. (A suggestion.) But I have to say, one of the most fun panels I’ve been to this conference was Exaptation and the Digital Now, sponsored by the New Media Caucus and taking place yesterday afternoon. It was chaired by Alex Myers and Daniel Rourke, with papers presented by Zara Dinnen and Rob Gallagher, as well as Myers and Rourke.

Part of why I found this panel enjoyable in addition to interesting (I’m scared to think about that Venn diagram re: arts academia) was the playful use of still images and animated gifs. And a definition of what on earth “exaptation” actually means to those of us who are not biologists!

*Please note: the rest of this post includes animated gifs, and is not recommended for readers prone to epileptic seizures.*

Exaptation (sometimes also called “preadaptation”) is usually used as an evolutionary biology terms. According to Berkeley’s Evolution 101 website, exaptation is:

a feature that performs a function but that was not produced by natural selection for its current use. Perhaps the feature was produced by natural selection for a function other than the one it currently performs and was then co-opted for its current function. For example, feathers might have originally arisen in the context of selection for insulation, and only later were they co-opted for flight. In this case, the general form of feathers is an adaptation for insulation and an exaptation for flight.

Hopefully my less-than-subtle emboldening of the above text makes the term’s applicability to media a little clearer.

The most direct and clear application of this term on the panel was in Rob Gallagher’s “Exaptation, Interpretation, PlayStation”, discussing the technical evolution of the Playstation gaming system. This brings us to this amazing Photoshopped image of different Playstation models put onto the heads of royal portraits, depicting the “dynasty” of the system. 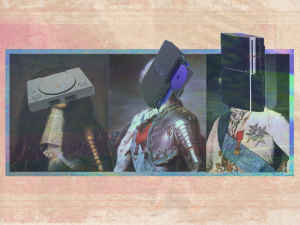 This is of course in reference to the Tupac Hologram That Wasn’t Actually A Hologram, a Pepper’s Ghost representation of rapper Tupac Shakur, which brought 2pac onto the stage with Snoop Dog and Dr Dre at Coachella 2012, despite his death from gunshot wounds in 1996. Pour one out. Dinnen’s paper was on holograms (and not-actually-holograms) and their relationship to our cultural imaginary, and the fascinating way in which their reality is often relegated to kitschy jewelry and credit card decals, but they hold a powerful place in the communal fantasies of science fiction.

Alex Myers’ “Fire in the Hole” was an awesome response to John Sharp’s “The Curiously Short History of Game Art”. Sharp claims that the “golden age” of art games was in the late ’90s and early ’00s, and then it sort of trailed off. To which Alex Myers basically said “lololololol wut no,” by giving a rich overview of examples of games-as-art from 1999 to 2013 that make some really powerful statements. Dust2Dust, for example, changes all player bodies into guns, gun shooting at other guns. Zach Gage’s lose/lose, below, is a game played by actually deleting files from your hard drive, gaining more points the more potentially hazardous deleting the file may be.

Alex has actually put the whole slideshow on his website, so if this topic is of interest to you I’d absolutely recommend taking a look here.

Possibly my favorite paper in the panel was Daniel Rourke’s “I Like the Glow that Flashes Red Like Our Krypton Sun. But Not This Irritating Noise. Make Way.” Because it was about Superman. This gif was in the presentation, and is pretty much the best thing ever:

Rourke focused in his talk on “The Phantom Zone,” a presence in both the comics and films. What the Phantom Zone is and how it operates varies throughout the history of the Superman franchise, but it is essentially a sort of parallel universe space that often operates as a prison or a weapon.

It can be fired as a weapon from a projection device, or viewed on a surveillance screen. Rourke discussed the Phantom Zone as “a metaphor for the moving image” ““in this phantom cinema produced after the event” (thus the terrifying green screen stagehands). He also brought up the “viral” trailer for the most recent Superman film, Man of Steel, featuring Chicago’s own storefront theater darling Michael Shannon as General Zod. Watch it here, and then think about how “glitch” aesthetics have become ubiquitous enough that the average American viewer of movie trailers can parse that video with narrative clarity.

Favorite gifs/jpgs from Exaptation and the Digital Now

The panel presentation conference format can be a little dry, even when the subject is super fascinating. (A suggestion.) But I have to say, one of the most fun panels …