Today I attended the panel On Sampled Time: Artists’ Videos and Popular Culture, chaired by Margot M. K. Bouman and featuring papers by Sarah Smith, Isabella L. Wallace, Solveig Nelson, and Godfre Leung. Unfortunately due to illness and weather-related travel woes, the first two papers (Smith and Wallace’s) were presented in absentia and read by the panel chair. But while this meant a less lively Q&A discussion, all the talks were really quite interesting. There was some thorough analysis of a range or artistic works engaging with (sampling, appropriation, critique of) popular culture–especially popular cinema– in the context of video and projection-based art.

What I thought I’d do for this blog post is give an overview of what works were primarily discussed, and then contribute a few recent examples of something I think is equally important: this process operating in the reverse direction, i.e. pop culture’s engagement with and sampling of the “art world”. 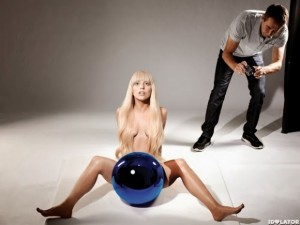 Lady Gaga being photographed by Jeff Koons. (I’ve tried to find a source to credit on this photo to no avail, sorry.)

Among others, the panelist spoke about the following pieces, which I’ve just put in chronological order:

Christian Marclay – Record Without a Cover (1985)

Steve McQueen – Five Easy Pieces (1995), among others of McQueen’s works

Isaac Julien – Frantz Fanon: Black Skin, White Mask (1996) (or rather I foolishly didn’t write down the name of the piece being discussed, and in hindsight I think it’s this one)

Some of the “popular culture” included (and sometimes directly portrayed in the works) in this dialogue: Hitchcock’s Psycho, the North Vancouver hardcore punk scene, the filmographies of Meryl Streep and Jack Nicholson, Apple’s FaceTime, the music of Brian Eno, vinyl culture, and New Queer Cinema’s relationship to “mainstream” cinema.

For me at least, the main thrust of the panel was this: Far from being devoid of meaning, a pop culture object, as Smith’s paper stated, reveals “the dreams, hopes, and taboos of the society that created it.” Artists borrow from these objects and text (typically visually or sonically), and then manipulate and recontextualize them to draw attention to the underpinnings of cultural production.

This may seem obvious, but as Nelson pointed out regarding Steve McQueen, criticism often emphasizes the mere referentiality of a work over its content, over the claims that the artist may be making about that which he or she is referencing. And while I don’t associate with anyone that actually believes in a strict “high art” “low culture” divide anymore, that is, apparently, still a thing.

Something that I think is really fascinating that wasn’t addressed in the panel is the fact that this is a two-way street. Traffic flow is very unequal, sure, but while artists sample pop culture, pop culture can also engage with the art world. This is certainly not a brand new phenomenon, but in recent years the interchange between the capital A Art World and pop culture–specifically popular music culture–seems to have ramped up. Realizing that not everyone interested in art history is as obsessed with music videos as I am, I thought I’d toss out a couple of recent examples:

In a hilarious crowning achievement of art and/as capitalism and/as cult of personality, Lady Gaga and Jeff Koons are apparently pals now. The cover of Gaga’s 2013 album ARTPOP is by Koons, a sculpture based on a series of nude photographs he shot of her, evidenced in the photo above. She also makes explicit reference to the artist in the lyrics of “Applause” [edit: I initially said these lyrics were in the title track, oops! I swear I’ve listened to this album a ton]: One second I’m a Koons, then suddenly the Koons is me / Pop culture was in art, now art’s in pop culture, in me. 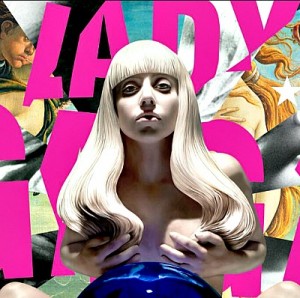 Gaga is also a friend and collaborator of our girl Marina Abramovic. See this (nsfw for nudity) video of Lady Gaga practicing the Abramovic Technique if you want to know what it looks like when a pop star is naked and blindfolded and walking through a field because a famous performance artist told her to. It’s like someone called a meeting and asked “What would make Sid Branca the happiest? Let’s do that!”

Speaking of Marina, let’s talk about Jay-Z. If you care about the state of American culture, watch this video. I can’t imagine anyone does know this, but the short version is that Jay-Z performed his song “Picasso Baby” at Pace Gallery in New York for six hours to make a performance art film. Lots of people were there, including Abramovic. It was directed by Mark Romanek, who in my opinion has directed some of the most important music videos of the last 25 years, including “Closer” (Nine Inch Nails), “Hurt” (Johnny Cash), “Criminal” (Fiona Apple), “Scream” (Michael & Janet Jackson), “Bedtime Story” (Madonna). He has also directed two feature films (or three, if you choose to ignore his disavowal of the 1986 film Static). He worked previously with Jay-Z on the video for “99 Problems.” 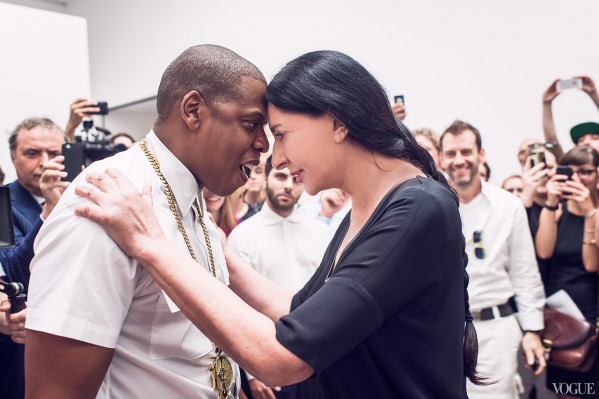 I’ll go ahead and say it: I’m not really a fan of Magna Carter: Holy Grail, the album that includes “Picasso Baby” (I prefer the Blueprint records, The Black Album, or Watch the Throne w/ Kanye), but it is rife with art world references. Check out the lyrics page on Rap Genius about “Picasso Baby”, being sure to click on each line for the commentary. (There is a lot of swearing, but also Rap Genius is one of the most exciting sources of pop culture analysis on the whole internet, seriously.) Here are some selections from the lyrics:

I just want a Picasso in my casa, no, my castle

I wanna Rothko, no, I want a brothel

Jeff Koons balloons, I just wanna blow up / Condos in my condos, I wanna row of / Christie’s with my missy, live at the MoMA

Sleeping every night next to Mona Lisa / The modern day version with better features / Yellow Basquiat in my kitchen corner / Go ‘head, lean on that sh*t Blue, you own it [Blue is Jay-Z & Beyoncé’s daughter’s name]

Spray everything like SAMO, I won’t scratch the Lambo [SAMO is yet another Basquiat reference; Lambo = Lamborghini] / What’s it gon’ take for me to go / For you to see, the modern day Pablo, Picasso baby

ALSO: there’s a reference made to the Golden Ratio (IN FRENCH), which lead the geniuses at Rap Genius to realize that the two distinctive parts of the song relate to each other IN THE GOLDEN RATIO. Mind blown. Too bad that album is not more awesome musically, because it is super fascinating as cultural commentary.

I have probably spent infinitely more time on this topic than anyone will ever care to read as a response to a panel on a slightly different topic, so let me just very quickly talk about Kanye West.

In 2010 Kanye West made a thirty-five minute art film called Runaway. You can watch the whole thing here. The Art Director for the film was none other than Vanessa Beecroft. They’ve collaborated in a few different ways, as Complex gets into here. They also included this photo, which I find hilarious: 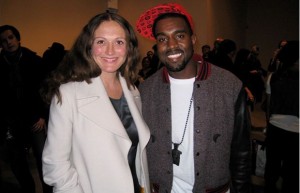 Kanye, like Jay-Z and Lady Gaga, has definitely put forth substantial efforts in the last couple of years to really situate himself in relation to not only pop culture, but the fine art world. These kinds of exchanges between the different cultural milieus aren’t always successful by any means, but I’d love to see more art historical and critical commentary about the implications.

Augh, and I didn’t even give myself time to talk about Lana del Rey and her pastiche videos. Get at me about it if you’re interested.