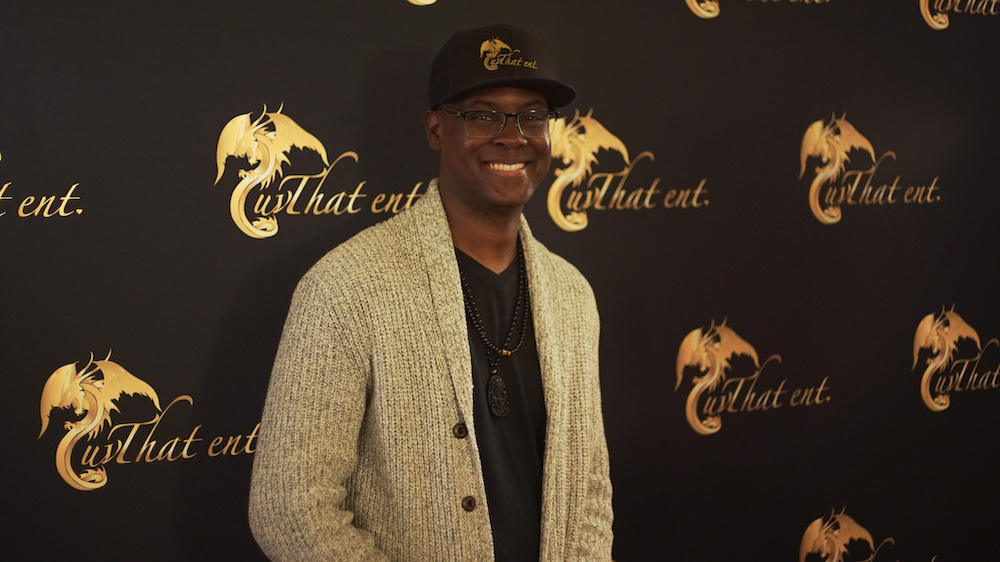 LeGrand Love is a student in the Entrepreneurship for Creatives Master’s program and is the founder of Media Artist Development Organizations (MADO). The nonprofit will utilize incubator sites in underrepresented communities to provide low-cost quality media arts education to young aspiring media creatives. We asked LeGrand about his inspiration, experience, and future plans for MADO.

What inspired you to create MADO?

Well this will be a longer answer than you probably would like but here goes! Growing up, I was one of those kids that had less than nothing. Seeing a movie was a treat, and I always gravitated to the old Kung Fu films with extremely ridiculous audio sync issues and special effects stunts. I wanted to learn how to create that so bad, but in the 80’s and 90’s there wasn’t any information you could find that taught you how to get into film and television in Georgia. So I decided to grab whatever opportunities I could to make a life for myself and that ended up being through the military.

When I started my undergrad studies, it was after a 22-year career in the Navy. I spent the majority of my time in the Navy stationed aboard submarines. Why I bring that up is because most people don’t realize how disconnected you become to normal everyday life. Let’s suffice it to say that you simply don’t continue to have a view of life in which you tend to relate to, outside of that hull.

So my journey into the entertainment space took a while, but once I got here I started to notice a trend that was really disturbing to me. Now I’m going to give you my honest opinion on something with the understanding that it may not be very popular. As an African-American student who isn’t at an HBCU, you tend to seek out, even if only for research, other African-American students to compare your work to. It’s a shared experience that I feel like we are hoping to see in the work. Nothing negative, just a hope that the voice is relatable, that there’s a command of the art form, and that it’s entertaining. Sadly, I hardly saw any of that from most of the African-American students I attended undergrad with and I started to wonder why.

I graduated and was offered a position as an Admissions Counselor for the college. I’d worked as an Outreach Specialist for the college while I was still a student, and so the company I worked on behalf of got to know me really well. I went to different colleges and high schools around Southern California and had the opportunity to speak to a number of students. Many were African-American and we’d have long conversations about the industry, their aspirations, and hesitations. I continued to have these same conversations in my Admissions role with perspective students. Their hesitance always seemed to point towards the lack of access to experience and the knowledge on how to gain access to the industry or training.

Now I know this is a long answer, but my inspiration was something that had followed me my entire life. I chose an entirely different career path because of the very reasons these young aspiring artist were explaining to me. I knew their stories and understood their plight and I needed to do something about it. The students that had made it to college were all shooting social justice pieces that they many felt an obligation to do. Their art became less about story and more about using the medium as a bullhorn. Again, I’d done the same thing, so this was relatable behavior.

The problem with it was that all the bullhorns sounded the same, but this was what these students were coming from. It was their world what they knew. Also, another problem was that there was a lack of preparedness for the type of program they were entering. Whereas many of their counterparts had gone to high or even middle schools where they took media courses and had a better foundation on which to build coming into the program.

As I thought about all of this, I felt compelled to address what I viewed as a problem for aspiring media artist coming from underrepresented communities. Ergo, Media Artist Development Organization (MADO) was born. It’s important for me to give back to the community that I came from and at least try to ensure that these deserving young artists have an opportunity for success. That they have a solid start to their futures. That they don’t have to make a choice to go into the military for the sake of one day being able to follow their passion. I see them, and I want to be there for them.

Why did you choose to attend this Master’s program?

I knew there was a lot about business/entrepreneurship that I simply didn’t know. I looked at a number of programs. It was a lot. When I found the MA in Entrepreneurship for Creatives program, there wasn’t even information on the Columbia College Chicago website about it yet. When I was contacted about the program, I was instantly excited about it because building and growing my own company was a post-military goal of mine. I started a production company in 2014 called LuvThat Entertainment, which I initially was going to work on growing with the knowledge I gained through this program. So after I flew to Chicago to attend the open house, I was totally sold. This was the only program I actually completed an application for. It was this one or nothing!

What has your experience been of creating this business during a pandemic, particularly while working on a business that will launch in another state?

Well I know that most people would think that it’s been extremely tough, but in honesty it hasn’t. I’m taking baby steps and really laying the foundation for the real work to come. While I’m in this program is the time for me to put some theory to practice, but for the most part I haven’t hit any major milestones. Again, I know that there is still a lot left to learn, so at the moment learning and establishing that foundation is my focus.

What are your plans following graduation? What is coming next for MADO?

This isn’t a knock on the program, so I don’t want anyone to take it that way if they are reading this. I decided on the nonprofit business model for MADO once I was in the program and I’d had a chance to really understand the best possible route for the endeavor. Unfortunately, this program really didn’t account for venture ideas that were focused in the nonprofit space. So there are still some things that I would like to learn after graduate.

It’s to that end that I’ve already started my application process into a Doctorate of Business Administration program focused in Nonprofit Leadership and Management. The program literally starts 2 days after I’m set to graduate from this one. As for MADO, I’m going to continue to build it as I learn. I’ve started focusing more attention on resources in Georgia and establishing contacts there that can help with some of the workshops I’d like to introduce as a precursor to establishing a physical location there.

How can people get involved in supporting MADO and follow along for future updates?

Currently, I’m building a website but at the moment there isn’t an official online presence for MADO just yet. However, I am on LinkedIn and can be found here. I’ll be providing updates there first as I begin my search for Board members and managers.