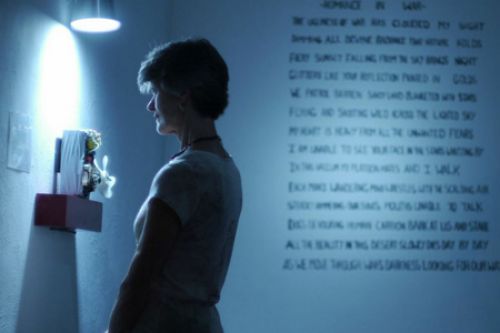 “Trauma transports the mind into a realm from which there is no retreat. There is no reverting to the old, placating ignorance that formed our expectations and definitions relevant to this existence. Trauma is simultaneously a destructive and creative force that reforms the landscape of perception that underlies what we commonly accept as ‘reality'”

The first paragraph prepares the reader for the raw and honest reaction to come in an extensive June 17, 2015 essay by Joseph Carmen, curator of the 555 Collective, the organization that showed A Grunt’s War Diary, 2014 alumnus Folleh Tamba’s solo exhibition last summer. Carmen, a former art student and prison psychologist, is the founder and director of the 555 Collective, which is “guided by the theory that Art>Trauma”  and conducts various creative projects that raise awareness and support for populations affected by trauma.

“Tamba returned from his final deployment to the Global War on Terror maybe a year or so before this period of time. He possessed the rank of Staff-Sergeant, a Purple Heart, a Combat Action Ribbon, and six or seven terabytes of digital documentation – proof of the sensory data that would form the core of his memories of war – data that only confirmed the loveless and random, yet concrete nature of death and suffering in this world – data that would hollow out a space within his mind, in which the reverberating volume of darkness would dwell.”

Carmen’s article swerves back and forth, intermingling his own experiences with his reaction to Tamba’s work and they time they spent together. To read this compelling article in its entirety, click here.