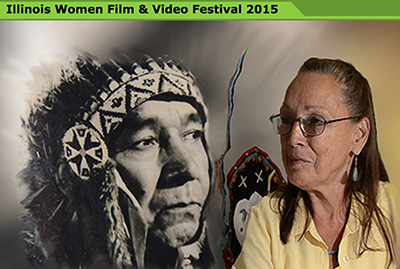 Annette Barbier will present a short video entitled “Approach, 2012”. A 2:12 minute work created with Drew Browning. It is a tale of the cycle of meeting, intertwining, and separating relationships.

Nancy Bechtol will present “Chief Thundercloud” as told by Hilda Williams and friends. This 22.30 minute work was excerpted from 1.5 hr interview. Hilda Williams (Little Fawn) tells the story of her father, Chief Thundercloud, (b. 1898. Ottawa) the first Tonto on the radio, and known for his presence at the Olsen Rug tribute to Native Americans with deep ties to Chicago and the American Indian Center.

Ines Sommer will present a 14 min. “demo” of “A Season of Change on Henry’s Farm” (work-in-progress). This video is about Hiroko and Henry Brockman, who run an organic family farm in rural Central Illinois. Against a backdrop of rural monoculture, Hiroko and Henry’s children Asa, Aozora and Kazami grew up on a biodiverse farm, exclusively speaking Japanese at home. They are in college now, and while her brothers are pursuing careers in science, Aozora is seriously considering combining her passion for creative writing with sustainable farming, despite the long hours and back-breaking work. One of the themes in Aozora’s writing has been navigating life as a bilingual, bicultural, biracial woman in a rural community. As Aozora is finishing her senior year at Northwestern University, her parents make an almost unheard move
for a farming family. They decide to take a year’s sabbatical in Japan.

Jean Sousa will present a new film “Alvaro”. It is from a series of films based on poems written by her late Aunt Alice.The new work is 6.50 minutes in length.