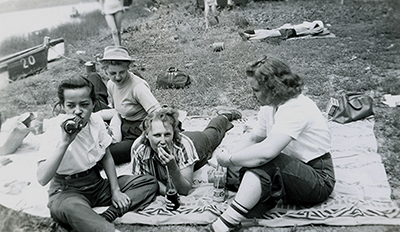 InterArts Professor Emeritus Michelle Citron is in the midst of a fundraising campaign for her upcoming film Lives:Visible. The film uses a private archive of over 2,000 snapshots of Norma & Virginia, a couple living in Chicago’s vibrant pre-Stonewall lesbian community. The photos taken with their Brownie camera enable Citron to explore both sides of life in closet, and ask what, if anything, has been lost in our open and modern society. Lives:Visible is the second and final film Citron is creating with these photos. The first film, Leftovers, tells the story of Norma and Virginia during the last decade of their life when they were cut off from family and community. Lives:Visible expands the story to explore the cultural and historical context of the photographs, and explores the ephemeral nature of all cultures.

With support from the 3Arts Foundation, Citron is in the process of raising the capital for the project. “Not only am I raising the money necessary to complete it,” says Citron, “but it’s creating a community/audience of people I don’t know and would have never reached without the magnification of social media. Through this process I’ve had strangers email me from all over the US telling me of their own caches of pre-Stonewall lesbian photos. ” The funding campaign is nearing its targeted goal; however, Citron emphasizes that she can stretch the goal and raise additional funds that will allow her to hire actors and a recording studio for voice overs. She thanks InterArts 2014 alumnus Leo Selvaggio for his help in managing the project’s online presence: “I couldn’t have done the crowd funding with him. He taught me how to use social media and created the film’s webpage and PR materials. Films are created through teamwork and Leo’s contributions are critical to my success.”