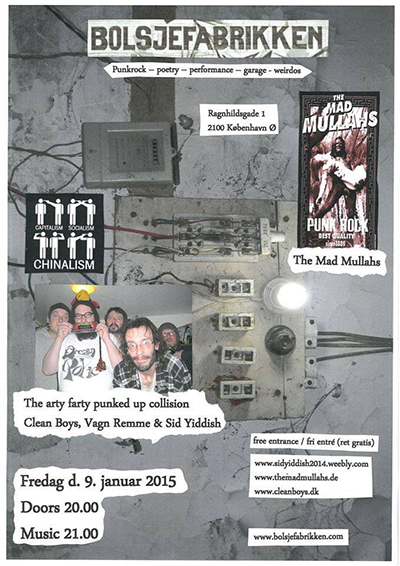 Second-year Interdisciplinary Arts & Media student Sid Yiddish is in the midst of a Danish/German tour in support of his improvisational orchestra’s (Candy Store Henchmen) latest CD effort, Merry Fucking Happy (Aleatory Records), which began on December 16, 2014 & will finish January 20, 2015. Yiddish has already performed several times, including Julepunk, a post-Christmas punk festival in Viborg, Denmark at Paletten and at a solo poetry/performance show, plus Sort Jul, a post-Christmas punk festival with Danish punk band Clean Boys and Danish poet Vagn Remme at Trøjborg Beboerhus, a community arts center located in the center of Århus, Denmark. Yiddish is based in Århus for the bulk of the tour. 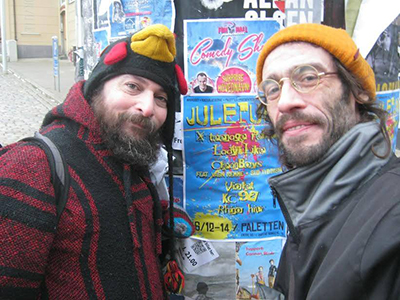 On Friday, January 9, 2015, Yiddish will perform at Bolsjefabrikken, in Copenhagen, Denmark, with Clean Boys, Remme & Danish performance artist, Vitawrapmand. The following evening, On Saturday, January 10, Yiddish along with Clean Boys, Remme and Vitawrapmand will perform at Klub Harder’s, in Svendborg on the isle of Fyn. On January 14, Yiddish’s documentary, Sid Yiddish will receive its world premiere, at Slagtehal 3, an underground film cinema, in Århus, Denmark. The documentary, which took 3 years to produce by Columbia MFA film graduate (2014) Ryan Buckley, has only been previously available online at Vimeo.

Back in the US, Sid Yiddish And His Candy Store Henchmen will perform Saturday, February 7, 2015 between 7-8pm on local college radio station, WZRD, 88.3 FM, to promote their latest CD effort, Merry Fucking Happy on local record label, Aleatory Records. WZRD is based at Northeastern Illinois University in Chicago. The broadcast can be streamed live at the following links:
http://www.streamingthe.net/WZRD-88.3-FM-Chicago/p/24445
http://peridot.streamguys.com:5750/live.m3u
https://www.facebook.com/events/1482757515316739/ 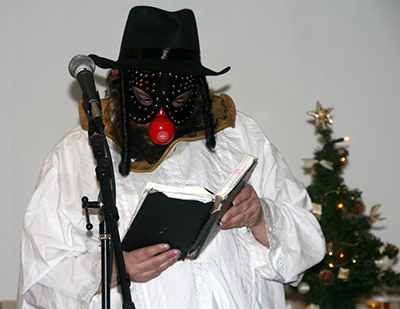 Yiddish will appear at the 26th Annual Rhinofest in Chicago, Illinois for his solo show, “Let’s Get Romantic And Spontaneously Combust With Sid Yiddish,” on Saturday, February 14, 2015, at 10pm with performance artist, Sharlila Manto. Yiddish will present the following performance pieces concerning the themes of love, death, depression and happiness, including: Moloch The Watchman; Talkin’ Fish Kabibbel Blues; Sid Yiddish’s Sports Death Museum & Good Mourning-Good Mourning. Tickets are $15 or pay-what-you-can. The festival is located at the Prop Theater, 3502-04 North Elston, Chicago, Illinois. https://www.facebook.com/events/810178935690609/

On the literary front, Yiddish will be featured in an upcoming book entitled Oy Oy Oy Gevalt! Jews & Punk, by author Michael Croland. The book’s contents will explore how some Jews relate to their Jewishness through punk. Most chapters will be about music, and one chapter will be dedicated to other areas of culture including zines, blogs, documentaries & young adult novels that show a Jewish/punk connection without necessarily fitting into a neat category of music. Oy Oy Oy Gevalt! Jews & Punk will be published by Praeger, an imprint of ABC-CLIO books sometime in 2015.