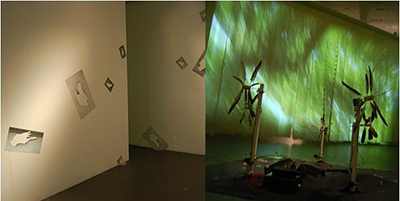 Visitors to Annette Barbier‘s Casualties at Chicago Artists Coalition are confronted by an abundance of dead birds—splayed photographs of birds that nature did not provide any instinct for dealing with gigantic, human-made structures of glass and concrete. Inside these structures are people who have no time to question whether they have any instinct for the same. Barbier’s installation is the intersection of these two sets of animals. Past the short foyer of dead birds, visitors are stopped by a large curtain of feathers without apparent opening. The curtain is lit from behind, flickering. It would be easy to stop here, assuming this giant barrier is the end of the exhibit. In order to progress into the installation, visitors must violate the haptic taboo of the gallery, split the curtain and move forward. Beyond the curtain, the small gallery space is spare. The focus of the installation is an arrangement of kinetic sculptures, sitting on a felt blanket on the ground. Each piece is a rotating wheel of bird feathers, held up by a piece of small gauge PVC pipe. Wires run down the pipe into a single control card. The materials are all apparent but the effect transforms them into  minimal bird analogs. With three people in the room, it is easy to see that the feathers rotate faster when approached. With a crowd in the space, the effect is more chaotic and it becomes impossible to discern any relationship between proximity and movement.

Interactivity inevitably removes focus from anything but the interaction, if it is noticed at all. We saw multiple people investigate the piece, focused only on the electronics, trying to figure out how to “make it go.” In Barbier’s use, this is perhaps an intentional distraction, underscoring the disturbing relationship between humans and undomesticated animals in urban environments. The bird analogs spin pointlessly, pathetically, in relation to our nearness and stand in place of a connection to the natural world. With little time for contemplation and a schedule full of assessment, budget cuts, reorganization and perpetual training, the students, staff and faculty of the University of Illinois (where the majority of Barbier’s photos were taken) only encounter birds as they rain down from their impact against the Brutalist architecture.

The “silly project” described in the Danto quote at the beginning of this review describes Paul Klee’s painting Twittering Machine. Mechanical birds perch above a void, feet wrapped permanently around the wire that controls them. They are joyful and terrifying, tongues of exclamation marks and sharp barbs. One wears a spring while another resembles a fly fishing lure. They are unstable, with questionable guy-wires holding them upright. Their perch is a wave on which they will bobble up and down, and perhaps fall, but only if the handle is turned. Barbier’s birds, like Klee’s machine, are a mere mechanical replacements for living beings, precariously perched and only moving within a severely confined environment.

“In my writing I got so interested in fakes that I finally came up with the concept of fake fakes. For example, in Disneyland there are fake birds worked by electric motors which emit caws and shrieks as you pass by them. Suppose some night all of us sneaked into the park with real birds and substituted them for the artificial ones. Imagine the horror the Disneyland officials would feel when they discovered the cruel hoax. Real birds!”2

Where Danto saw an abundance of nature, Philip K. Dick, quoted above, sees the replacement of wildlife with structured wildlife encounters. The artificial birds flutter and respond to our presence but only represent birds as humans imagine them. Barbier’s fake, electric pinwheel birds reduce the illusion to a mockery. The foyer of the installation shows the results of human architecture, inside we are confronted with the futility of seeking a technological solution. 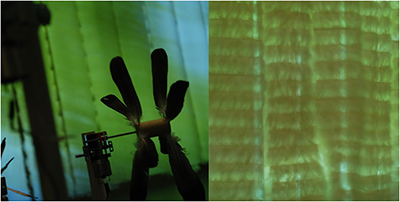 “We are the first generations born into a new and unprecedented age — the age of ecocide. To name it thus is not to presume the outcome, but simply to describe a process which is underway. The ground, the sea, the air, the elemental backdrops to our existence — all these our economics has taken for granted, to be used as a bottomless tip, endlessly able to dilute and disperse the tailings of our extraction, production, consumption.“3

Casualties is not a call to action but a dirge, room silent but for the mechanical sound of small motors. Unfortunately, the human-centered reduction that Barbier’s sculptures outline, a false dichotomy in which we can only “save” or “destroy” nature, is undermined by an associated event. In a catalog insert, we are invited to a workshop on Preventing Bird Strikes. In this two hour workshop, we can learn to “create [our] own DIY devices to help birds avoid collisions with reflective glass surfaces.” The disjunction of human and natural is a much deeper issue and Barbier’s installation poetically makes visible a small intersection in civilization that is incredibly complex, and broken.