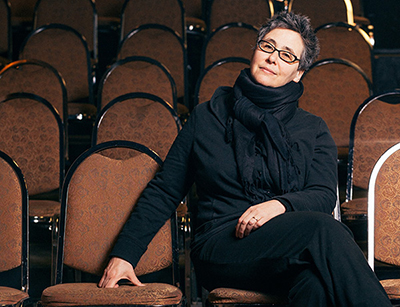 InterArts faculty member Jenny Magnus will be reading at the Women and Children First Bookstore (5233 N. Clark St. in Chicago) Friday May 9th @ 7:30 p.m. Poet cin salach will also be reading at this event.

Magnus will be reading from her recently published book Observations of an Orchestrated Catastrophe: Plays and Performances. She  is a writer, performer, musician, director, and teacher who is a founding co-artistic director of the Curious Theater Branch and has been produced at Steppenwolf Theater and at the Museum of Contemporary Art in Chicago. Magnus is a faculty member in both the graduate Interdisciplinary Arts department and the undergraduate Interactive Arts and Media department.

When I Am Yes, the second book of poetry from cin salach, has been described as “deeply sensual” and “polyphonic.” Cin has collaborated with musicians, video artists, dancers, and photographers for more than 25 years in such groups as The Loofah Method, Betty’s Mouth, and ten tongues. She has also been widely published in journals and anthologies, including Starting Today: 100 Poems for Obama’s First 100 Days, Brute Neighbors: An Urban Nature Anthology, and Poetry Speaks: Spoken Word Revolution.