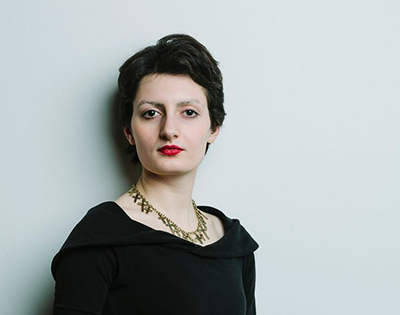 The energy behind Sid Branca this week is almost palpable.  A second-year media student in the InterArts program, she is wearing a variety of hats during the College Art Association’s Annual Conference.

1. She is en pointe as a New Media Caucus coordinator and presenter.
Branca became involved in the New Media Caucus in February of 2013 by recommendation from Paul Catanese, a Program Director and an Associate Professor in the Interdisciplinary Arts program. She took on a variety of tasks in the NMC, which eventually led to her coordinating the New Media Caucus Showcase with Justin Botz, a fellow InterArts student. The Showcase will be held at 8:00 p.m. on Thursday, February 13 in the Conway Center. She’s also presenting her own work that night, and has left her colleagues to wonder as she has indicated she has something special up her sleeve.

2. She’s on the Columbia College CAA Planning Committee.
Columbia is involved in the conference in a very big way this year, hosting “An Evening at Columbia,” a series of gallery openings and events throughout the college on Thursday, February 13. Branca has been behind the scenes here also, assisting in getting sponsorship for food and beverages at the galleries, among other roles.

3. Blogging? Yes, please!
No doubt the Columbia community at large will be benefitting from Branca being a part of a posse of approximately fifteen roaming bloggers, who will be delivering up to-the-minute information on Columbia events at the conference as it progresses.  Keep track of Branca and her fellow bloggers here: https://blogs.colum.edu/caa/

4. She will attending a variety of panels.
Branca’s background is in performance as well as film and comparative literature. She is rooted in discourse and structures of academia, and sees it as an important part of her practice as an interdisciplinary artist. She has a strong desire to engage in contemporary art criticism and theory, and to contribute to the field of academic discourse around art. Says Branca, “critical discourse about new media is very tangibly burgeoning and very exciting, and I want to engage with that as much as possible.”

5. OK – so this isn’t at the CAA Conference per se, but next week she’s also performing, showing video, and her theater company is opening a show. In her spare time.
Performance: La Lune de Femme with The Good Night Ladies,
Video Work: STUFF ON STUFF ON STUFF at CAALTERNATE2014.
Theater Company: First Floor Theater opens The Reckoning of Kit and Little Boots

6. She is being given the Presidential Medal of Honor.
Not really. But don’t count her out.