2011 Alumnus Daniel Mellis is a recipient of the 2013 PEN Translation Fund for his collaborative work on a visual translation of the futurist classic, Tango with Cows.

Each year the PEN/Heim Translation Fund plays a critical role in bringing important works of literature from around the world to an English-speaking audience through vivid and elegant translations that communicate not just words, but ideas and inspiration. Now celebrating its tenth year, the Translation Fund has just is announced the winners of this year’s competition. From a field of 180 applicants, the Fund’s Advisory Board—Susan Bernofsky, Barbara Epler, Richard Sieburth, Lauren Wein, Eliot Weinberger, Natasha Wimmer, and Matvei Yankelevich, and chaired by Michael F. Moore, selected only thirteen projects for funding, one of which is a collaborative piece by Eugene Ostashevsky and InterArts/CBPA 2011 Alumnus Daniel Mellis.

The collaboration by Eugene Ostashevsky and Daniel Mellis was the translation of Tango with Cows by Vasily Kamensky. Originally printed on wall-paper and decorated with cubo-futurist drawings by the Burliuk brothers, this collection introduced the “ferro-concrete” poem and other striking verbo-visual innovations. The Translation Fund jurors names Ostashevsky and Mellis “A perfect team for the task… as they are able to provide both the linguistic and visual expertise that this Russian futuristic text demands.” 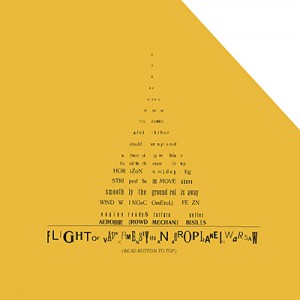 “Flight,” an image from Tango with Cows

Suzanne Nossel, Executive Director of PEN American Center, says “The PEN Translation Fund has played a seminal role in promoting international literature in the United States and in enabling some of the globe’s most talented writers to reach audiences who have been informed and enlightened by their work. In so doing, the Fund helps advance PEN’s mission of bridging divisions through a shared appreciation of great literature.”