The spring academic semester ended many weeks ago, but the InterArts community is in high gear, although not necessarily on campus. Students, faculty, and staff are appearing all over the state, nation, as well as internationally as they pursue various ways of artistic practice, working on both new and ongoing projects. 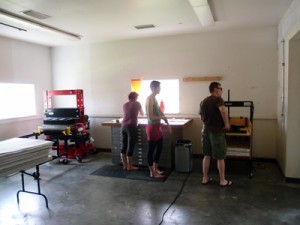 Over the weekend of June 7–9, graduate students Alex Borgen, Jillian Bruschera, and Heather Buechler accompanied CBPA studio technician April Sheridan on a trip to the Fresh Press Agri-Fiber Paper Laboratory in downstate Urbana-Champaign, IL. There they attended a social paper practice research session at the lab, which was founded two years ago by University of Illinois design professors Eric Benson and Steve Kostell. Fresh Press is a handmade paper collaborative dedicated to research on locally harvested plant fibers. Project participants include a research specialist and farmer Zack Grant (who runs the Student Sustainable Farm); the Soybean Press; staff at the Rare Book Library; retired medical school professor Charlie Wiseman; and two graduate student Research Assistants, one from the Graduate School of Library and Information Sciences (GS- LIS), and the other from the University’s Art Department. 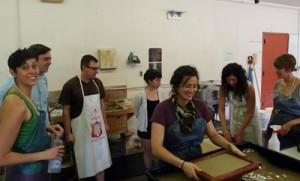 Alex Borgen (pictured at left in photo above), founder of the CBPA’s Papermaker’s Garden, was contacted by Eric Benson to talk about the shared interests and missions of the two projects. In January 2013, April Sheridan met and spoke to Eva Chertow at the CBAA annual meeting at Yale University. Chertow is a graduate student in the U of I GS-LIS program and a Fresh Press volunteer. When CBPA’s Jessica Cochran and Professor Melissa Potter began the Social Paper project (exhibitions and events to be centered at the CBPA papermaking studios), including Fresh Press in the event was a natural choice, based on their environmental concerns and grassroots social practice within the art of papermaking.

The CBPA visitors to Fresh Press toured the Student Sustainable Farm, participated in work sessions in the Fresh Press papermaking facilities, and shared information and ideas about papermaking and gardening/farming as an important social practice. The conversations covered lots of ground (no pun intended), including papermaking tips, environmental implications of papermaking, the effects of research on artistic and commercial papermaking, urban gardening and farming, ideas about increasing the use of locally sourced materials, and how to increase institutional and community outreach programming. The productive visit is just the start of what promises to be a long-term collaborative relationship between the two college communities and their gardening and papermaking projects. 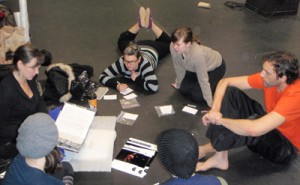 People on a Stage in rehearsal last spring.

At the end of June, the interdisciplinary movement ensemble People on a Stage performed at the Performance Studies International Conference at Stanford University. The group, led by artistic director Alexa Rittichier, is comprised of a number of InterArts alumni.

By summer’s end, Professor Melissa Potter anticipates she will have written about 15,000 words, as she churns out artist statements, grant proposals, final reports, and possibly a commission. And, while generating this massive amount of writing, she submitted to and was accepted in the upcoming project by Barbara Madsen, Unspecific Object: Detritus From the Analog and Digital Age. Vol 1, a combination of limited edition artists’ book; an e-book with hyperlinks, sound, history and text; and an exhibition. Potter’s submission was a mask she made in a workshop she led in the Republic of Georgia with activists who were attacked during gay pride in Tbilisi. Potter taught the workshop this past winter, working with artists there in their native tradition of felt, to help them come up with alter egos that would serve as protectors. 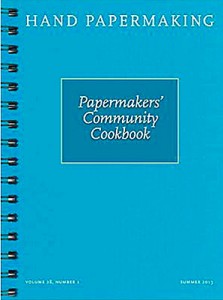 Potter’s ongoing work with Laura Anderson Barbata has just been profiled in the summer issue of Hand Papermaking magazine, and at the end of June she was a presenter and facilitator at a Gender Assignment workshop at the Congreso Internacional Sobre Educacion in Las Artes Visuales at ENPEG La Esmeralda Centro Nacional de las Artes in Mexico City (La Esmeralda School of Art, Mexico City)

Musician, composer, and InterArts Media MFA Sid Yiddish kicked off his summer by performing with his band the Candy Store Henchmen at Joan’s Studio in Hyde Park, and at the University of Chicago’s International House during Make Music Chicago 2013. 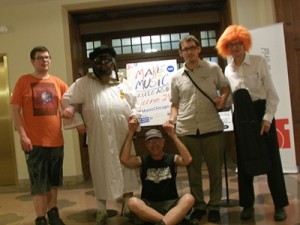 Those early gigs were in preparation for their audition for the television show America’s Got Talent, where they performed in from of celebrity judges Howard Stern, Howie Mandel, Mel B (Scary Spice/Spice Girls) & Heidi Klum at the Rosemont Theater in Rosemont, IL. 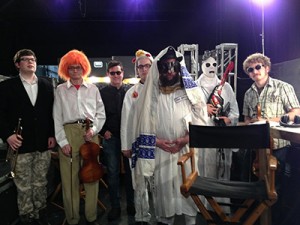 Unfortunately, Candy Store Henchmen did not make the cut, but Yiddish moved right along onto his next project, starting an Indiegogo campaign for his work The Permission Project, his new performance piece based on the art of asking for permission. His goal is to take the project all the way to Seattle by train, performing along the way. Some of the perks offered in exchange for donations include the “Permission for a Hug” certificate; a custom composed personalized song about a donor; or the creation of an unusual YouTube video produced specifically for and about the donor, entitled Glory Smothered In Chocolate. This summer he has been collaborating with Noam Paco Gaster to present segments of the piece in Kenosha WI, in preparation for the day they hit the road.

InterArts Media MFA Valentina Vella has been slowly meandering her way through the U.S. on horseback, as part of an ongoing artistic investigation she began working on 2012. She made extensive preparations over the past year for her trek, entitled “A Ride West,” which she is also documenting with writings and photographs on her blog. 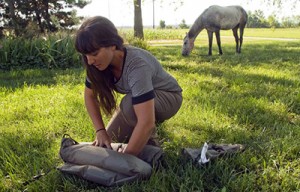 Since taking off from Chicago and meeting up with her horse Ariel in Kansas, she has traveled over 60 miles towards her final destination of Colorado. In Kansas her steed developed some hoof and heel issues, and while he was resting up, she was interviewed by the Lawrence Journal World Newspaper.

There’s still plenty of summer left for more projects and stories, and you can expect them to be covered here on the InterArts CBPA newsfeed in upcoming weeks, as updates and news trickles back to Chicago.